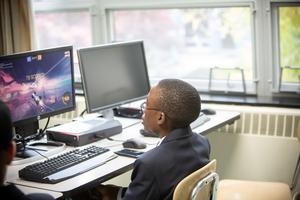 Whether it is Rocket League, League of Legends or Smite, our E-Sports teams are ranked among the best in the state.

Xavier capped off an unbeaten season by winning its second Esports Rocket League title in a row this past school year. The Falcons defeated Newtown 4-0 in the best-of-seven series at Central Connecticut State University.

Esports continues to grow, and is a multi-million industry. It is sanctioned by the CIAC, the governing body of high school sports in Connecticut, and CIAC administrators were present at Central the day Xavier won as representatives handed out championship hardware. Central opened its own gaming facility on campus in the fall of 2019, just months before the Falcons won the title.

Rocket League is a fast-paced game that combines cars and soccer as teams of three compete to score as many goals as they can in each 5-minute game.

Xavier also won the Smite title in the 2019-20 school year. In Smite, players control a god, goddess, or other mythological figures, and take part in team-based combat, using their abilities and tactics against other player-controlled gods and non-player-controlled minions.  The Falcons compete in a third program, the League of Legends, which also qualified for the state tournament. All are PlayVS leagues.