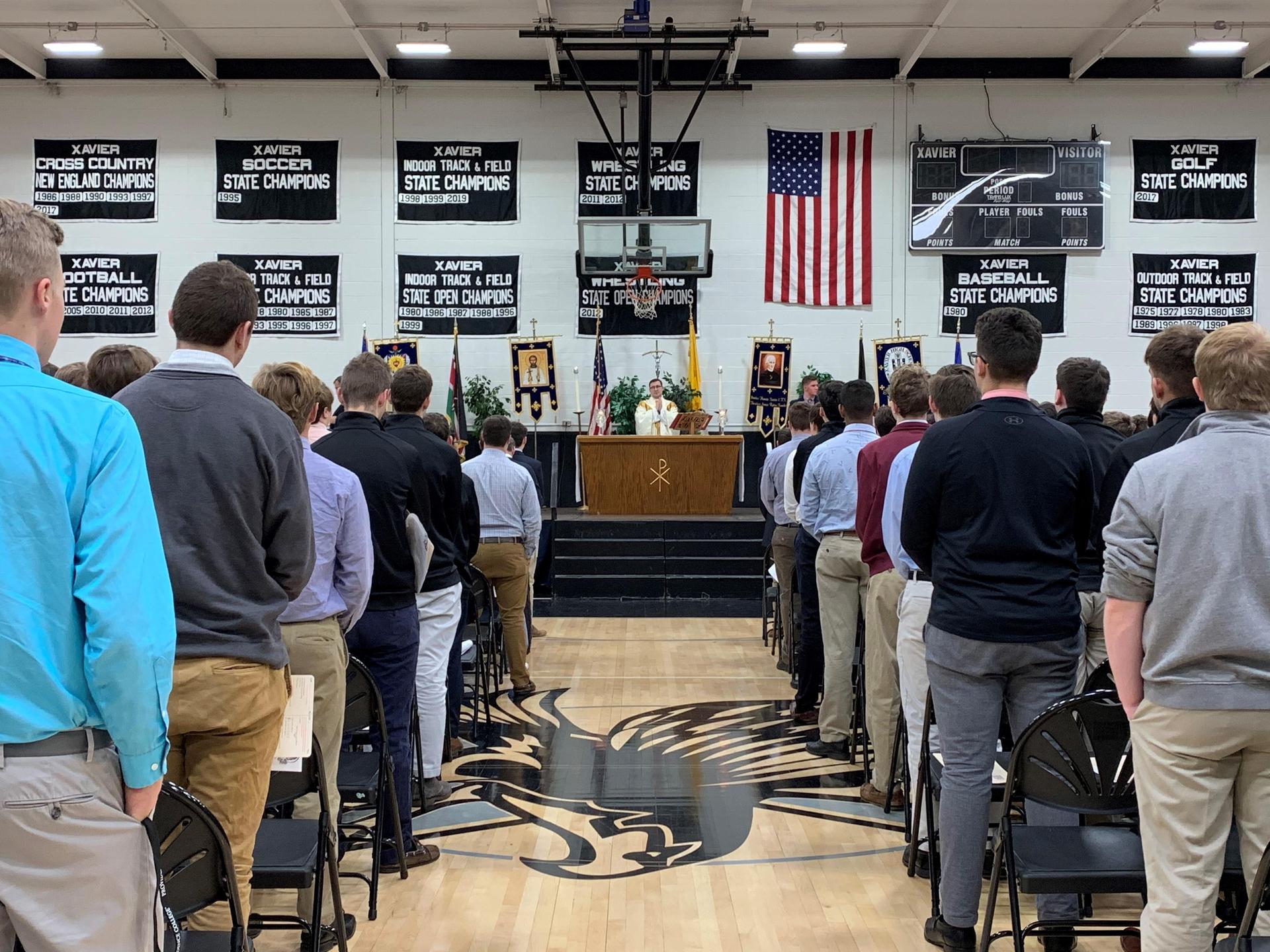 The Campus Ministry Department at Xavier ministers to both students and faculty.
The Mission
For students there are numerous spiritual opportunities, ranging from Masses and Prayer Services to retreats and pastoral advising. There also are service hours required; by March of their senior year, students must have completed 65 hours of service. It is not uncommon for students to go above and beyond, logging hundreds of hours.
For faculty and staff there are retreats at the beginning and end of each school year as well as periodic prayer services attached to professional development.
The Staff
Mr. Peter Lyons, Director of Campus Ministry and Faculty Formation
Prior to his ministry at Xavier, Mr. Lyons taught at Our Lady of Lourdes High School in Poughkeepsie, N.Y., starting in 1998. During that time he also served for three years as the Director of Religious Education at St. Gregory Barbarigo Parish in Garnerville, N.Y. Mr. Lyons holds a B.A. in Marketing Communications from Iona College in New Rochelle, N.Y., an M.A. in Religious Studies from St. Joseph's Seminary in Yonkers, N.Y., and an Ed.S. in Education Leadership, Management, and Policy from Seton Hall University in South Orange, N.J. Mr. Lyons also is the moderator of the Pro-Life Club and head coach of the varsity tennis team. Mr. Lyons and his wife Heidi have nine children, including two Xavier alums (Eric '16 and Matthew '18), once current Xavier student (Daniel '21), one Mercy High School alum (Bridget '14) and one current Mercy student (Catherine '23). Mr. Lyons can be reached at [email protected].

Mr. Braychak has been a member of the Xavier faculty for over two decades and has served as a department for social studies and fine arts. In addition to his regular teaching responsibilities as a faculty member in the Social Studies Department, Mr. Braychak has served in various capacities at Xavier, as a coach, as the current moderator of the photographer club, and as a former instructor of our Driver Education department.

Born and raised in a small Derbyshire country town, Bro. Philip joined the Xaverian Brothers in 1979 and began teaching at Xaverian College in Manchester, England, in 1980; in 1985 he became head of the Religious Education Department. He was named Vice Principal  for Pastoral and Faculty Development in 1989. In 1981 he began a long association with HM Prison Service Chaplaincy, first as a volunteer catechist on the young offenders wing at Strangeways Prison in Manchester. Over the coming years, he worked on the adult wings as a Prison Visitor and substitute Chaplain. In 1992 he left Xaverian College to work as a full-time Chaplain at HM Prison Brixton (South London), returning to Strangeways in 1998. In 2002 he was asked to go to DR Congo as Director of the Scholasticate house in Lubumbashi, Katanga Province. From 2004–08 he was the Regional Superior of the Xaverian Brothers in Congo. From 2009-2014, he taught in an English speaking school in Lubumbashi. He began teaching at Xavier in March 2016.