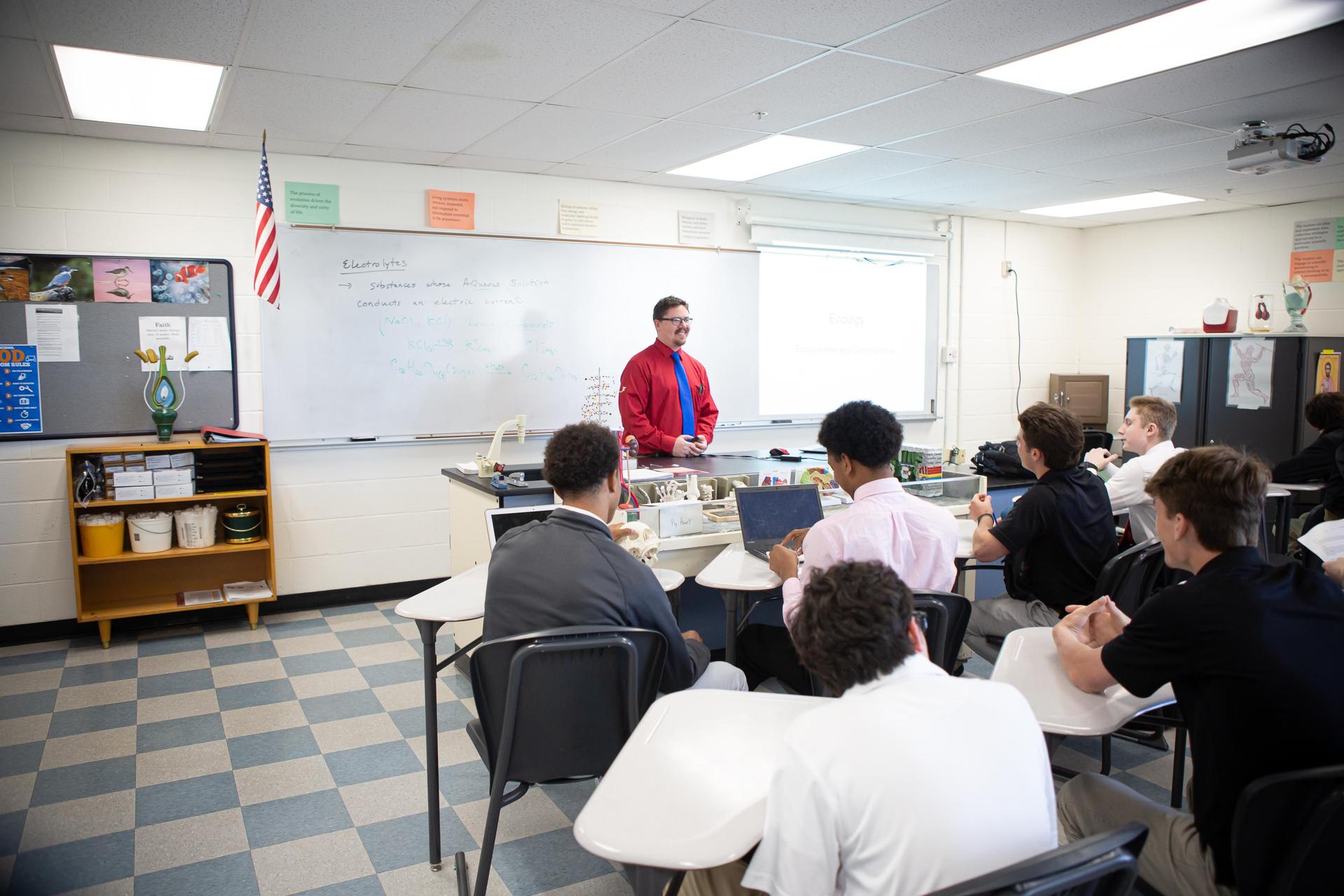 This is the basic menu: Xavier's academic levels are represented on the transcript by AP (Advanced Placement®); H (Honors), A (Accelerated), and CP (College Prep). We have 26 STEM courses, 19 Advanced Placement® classes, and 14 UConn Early College Experience (ECE) classes, the latter equaling a total of 44 credits.

But there is nothing basic about a Xavier education, inside and outside the classroom.

Supported by nearly six decades of tradition and the rich history of the Xaverian Brothers, Xavier is one of Connecticut’s premier college-preparatory high schools that attracts students about 70 cities and towns in Connecticut. Few know many people when they get here, yet they leave with friends for a lifetime.

Xavier has many veteran teachers who inspire students through their creative approaches.

Build a rocket and launch it in the courtyard as a way of learning about engineering in Mr. Doherty's class.You never know who the next rocket scientist might be.

Build a rubber-band car and see how far it can go down the hallway in Mr. Gargano's and Ms. Keefe's Physical Science classes. Maybe we've got the next NASCAR driver here, just like Ryan Preece '09.

Be entertained and enlightened in a fast discourse during Civics class taught by Brother Ryan, C.F.X.  We might just have the next mayor of Middletown in the room.

Create a bill with the format used by Congress in Mr. Guyon's social studies class. You never know who's headed for a career in our nation's capital.

For a student to attain High Honors for a given marking period, he must

For a student to attain Honors for a given marking period, he must

For a student to qualify for the end-of-the-year Headmaster's List, he must

For a student to qualify for the end-of-year Principal’s List, he must

For a student to qualify for the Brother Celestine Medal (which a student may receive only once during his four years at Xavier), he must

** Pass/Fail Courses are NOT included in the tabulation for Honor Roll, Headmaster’s List, Principal's List, or Brother Celestine Medal.

Grade Point Averages on report cards and transcripts are unweighted.

The Monsignor Wilson Chapter of the National Honor Society includes qualified juniors and seniors. Each member receives a handbook outlining the Chapter rules and regulations. Besides honoring outstanding students, the main goal of the local chapter is to give service to the school community. Members of the society are expected to tutor students and assist at such things as parent programs, special Masses, Chapter service projects, and Advancement and Home & School events. Each member is required to give 12 hours of service time each year.

Xavier High School is powered by Blackbaud’s onCampus Learning Management System and digital grade book. This new system helps students keep track of homework and grades, allows them to more easily communicate with teachers as well as use of 21st century technologies to collaborate with classmates in digital settings. Additionally, parents have their own login, allowing them to keep updated on student grades, assignments, and schedules.

As part of Xavier High School’s Bring Your Own Device (BYOD) program, all students receive a subscription to Microsoft Office 365 and five (5) complimentary copies of Microsoft Office that they can be installed on their personal device and any other device at home that they may do work on (a cost savings of $150 per copy). Microsoft Office is professional software used in colleges and Fortune 500 companies all over the world, and proficiency in Microsoft Office is one of the top desired skills of students entering the workplace.

All Xavier freshmen will be trained to use Microsoft Office as part of the first-year curriculum.Use of the onCampus LMS and Microsoft Office is just another way that Xavier High School is preparing our students to succeed in college and beyond.