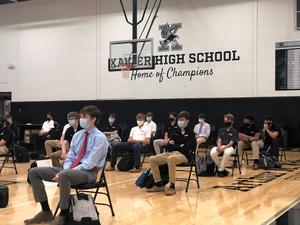 The message delivered to Xavier High School students is the same every year, though this year the world is a bit different

The message delivered was no different than what is asked each year of Xavier students. Yet, given the events that have unfolded in our country since the death of George Floyd, who was Black, on May 25, protests and unrest have occurred across the country, making this year different.

“This message is nothing new to what I have said to you the last couple of years, but it is important to address in today’s climate, and face to face, not through a computer screen, and that is why you are here,” Xavier High School Dean of Students Nick Cerreta told the junior class gathered in the gym on Sept. 10, the first week of school for all students. Each class received the message individually in a socially distanced setting, another sign of the times.

“At Xavier we know very well how to treat others, including those who are different from us … and guess what, guys, everyone here is different from one another,” Cerreta said. “If everyone were the same, it would be a very boring world. We have an opportunity to be a model for each other, our community and society in this regard.

“We are blessed,” Cerreta said before pausing and amplifying the point. “We are truly blessed to have diversity here at Xavier. Some are white, some are Black, Asian, Hispanic, from poor backgrounds, from richer backgrounds, with different strengths and weaknesses, different struggles and joys. We can learn a lot from people who are different from us. At Xavier none of these things matter because we are united in one identity, Xavier men in a Christian community.

“So what does this mean? It means that we see every single person we encounter as a child of God, made in his likeness. We see each other as brothers, and we are guided by the Gospel message you’ve heard plenty of times, to treat others the way you wanted to be treated.”

Cerreta made it clear, just as he has each year, that the school does not tolerate and will never tolerate one person denigrating another in any way, shape or form, whether it be race, ethnicity, religion or anything else.

“Xavier men are known for politeness, their faith and generosity, care and love for one another,” Cerreta said. “You are Xavier men 24-7, 365 days a year.”

Principal Brendan Donohue closed the assembly by linking the message to school history and to the Xaverian Brothers.

“Theodore James Ryken founded the order as a band of brothers and wanted to edify them, build up one another,” Donohue said. “That’s our legacy, who we are, so what Mr. Cerreta has talked about is nothing new in a Xavierian education, in our Catholic tradition. It’s how we treat one another. Years of Xavier men have acted the way we expect you to act. This message has resonated for many years in the Xaverian community and here at Xavier. Keep in mind that you are part of something bigger.”

Principal Donohue also mentioned once again to the students that this year Xavier would be focusing on compassion, one of the five Xaverian Values.

That followed up on a message he had delivered to students during orientation in the first week of September and in a welcome-back message he had emailed to parents, which said: “We are called to be compassionate toward all in need. Compassion also calls us to ‘look through the eyes of Christ’ and to be ‘the eyes, the ears, and the hands of the loving God.’ You see how this very easily relates to our school motto, ‘Be a Man,’ by which we mean, A Man Like Christ. Being compassionate is being Christ-like. In these challenging days of COVID-19, racial tension, and political turmoil, we, as members of a Xaverian school are called to be part of the solution by being compassionate toward all.”