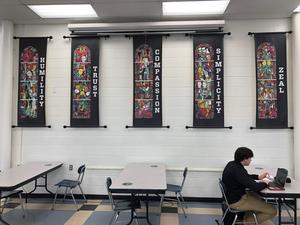 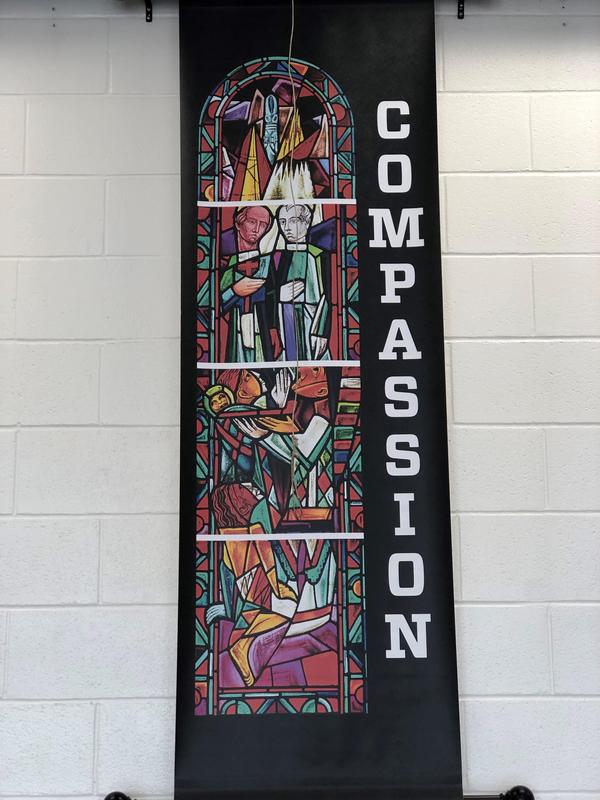 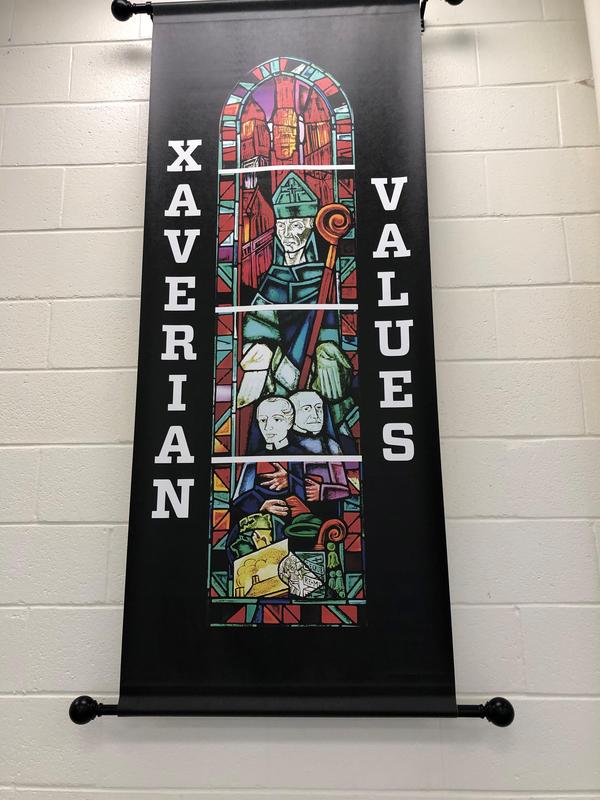 New banners displaying the Xaverian values hang in the dining hall. The first banner reads “Xaverian Values,” and is followed by five banners, each with one the values: “Humility, Trust, Compassion, Simplicity, Zeal.”

They replaced older blue felt banners. The new ones, with the words written in white on a black background, jump off the wall in the figurative sense. Also pictured on the new banners, unlike the previous banners, are the stained glass windows that are such a part of Xaverian history.

“The windows were originally in the Xaverian house of formation (novitiate) in Torhout, Belgium,” Brother Philip Revell, C.F.X., said. “When the house closed they were taken out and put in storage. When the Brothers rebuilt the community chapel at the house/school in Bruges, the windows were used to make a wall of windows on one side of the chapel where they would get natural light from the courtyard.”

Details of each window are underneath the pictures of them next to the statue of St. Joseph outside the dining hall. They are all connected with the story of the early years of the Congregation.

1825-1826: Theodore James Ryken is pictured with the Dutch author J.G. Le Sage ten Broek and four children from an orphanage run by the Dutchman where Ryken worked as a catechist and shoemaker.

1832-1833:  Ryken with Fr. Stephen Badin, under whose auspices Ryken first traveled to America as a catechist to the Native Americans.

Circa 1840: Ryken, dressed in the habit of the Xaverian Brothers, and his Jesuit confidant Fr. Van de Kerckhove, stand before the Bishop of Bruges whose coat of arms, “Sequere Me” (The Good Pastor), is seen in the bottom panel. In his hands Ryken carries symbols of the Bishop’s approval of the plans for the Congregation.

1846: Fr. Martin Van Beek at his school for the deaf and mute where Ryken’s first disciples – the four praying figures in the background – learned sign language and taught.

1848: Two of the pioneer Brothers who began the Xaverian mission in England, Brother Stanislaus and Brother Alexius, leading a procession in honor of the Blessed Mother.

Stained glass windows in churches and chapels have a long history. Early on, they were a way to teach the masses who did not have access to Bible stories in written form or could not read, about God. They told a story, just as the stained glass windows of the Xaverian Brothers do.