Paul Smith '08 Is Busy In Boise 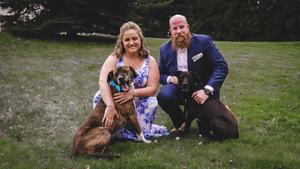 Oh, the places you’ll go, to borrow a phrase from Dr. Seuss.

Paul Smith ’08 went from Middletown to Boston to Boise, Idaho, to New Haven and back to Boise.

Smith has an office with a view, and what is outside his window is recognizable to a college football fan.

“It’s definitely a sight the first time you see it,” Smith said recently, “but when you’ve been here long enough a green field seems abnormal. It’s iconic, and it’s cool to look out my window and see that blue field. Pretty unique.”

That blue field catches your attention, as does the Boise State football team. Boise State is not a Power Five program, but the Mountain West team knocked on the door of the nation’s elite in the 2006 season and came charging in with its Fiesta Bowl victory over Oklahoma on Jan. 1, 2007 to complete a 12-0 season. Boise State had become much more than the team with the blue field.

That color brings to mind something else about Boise State football.

Smith was a wrestler for Coach Mike Cunningham Xavier, and he knew even then that he wanted to get into the medical field in some way. At the same time he has always had a passion for sports.

“After digging into it a bit, athletic training seemed to be the best of both worlds,” Smith said.

This year is unlike no other in college sports with COVID-19, so Smith says about half his time is spent helping to coordinate testing, working with local public health officials, and dealing with any issues that arise from testing.

“The rest of time is spent on what we would normally do, such as rehabbing and treating injuries,” Smith said. “We have a great staff and we all work together, but a big chunk of my day now is consumed with COVID unfortunately.”

On a normal game day, Smith and the staff will do some treatments during the morning, and then as the game gets closer, there’s stretching, soft tissue work and taping ... a lot of taping. Ankles, knees, wrists, elbows. You name it. About 50-60 players gets taped.

Smith married a Mercy graduate (Darlene Vadasz ‘09). She is an EMT and works in the Emergency Department at St. Alphonsus Hospital in Boise.

Even though Smith is miles away from home, some things never change.

“A lot of people I’m extremely close with are friends I made at Xavier,” Smith said. “Xavier definitely has that brotherhood mentality, making friends and connections you carry the rest of your life. Xavier taught me discipline and how to work hard toward a goal … I don’t think I’d be where I am if I did not attend Xavier.”