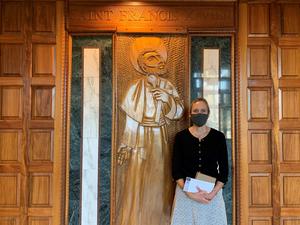 "I'm Amazed And Blessed" To Be In Company Of Past Winners

At the end of Thursday’s Mass celebrating St Francis Xavier, the school’s patron saint, the prestigious Ryken Award was handed out. It is voted on by peers and awarded to a faculty or staff member who by their commitment and dedication lives the mission of the Xaverian charism of education.

As Xavier High School Headmaster Dave Eustis read off comments about the winner, he mentioned many superlatives. And one of the winner’s many qualities was that she was humble. That could be seen in her response to her name being called. She had no idea she would win. She was, indeed, humbled.

“I feel like I’m surrounded by giants,” guidance counselor Beth Pattavina said shortly after her named had been announced after the conclusion of the Mass. “I’m amazed and blessed to be with them. I had no idea; it’s a surprise.”

Pattavina has been in the Xavier guidance department since September 2015. Prior to that, she worked for the Middletown Board of Education as a Special Education Tutor & Case Manager for 14 years and for the Middlesex Family Advocacy Group as a Remedial Tutor for four years. Both positions involved servicing students with learning differences in parochial schools. After graduating from St. Bonaventure in 1990, she taught for seven years at St. John School in Middletown. She is a 1986 graduate of Mercy High School.

Pattavina and 2009 winner and current Director of Guidance Joan Tomasiello had been talking earlier in the day about who might win. Pattavina was not thinking of herself. She was talking about others she felt deserved to win. Tomasiello knew Pattavina had won but did not let on.

“My heart is overjoyed,” Tomasiello said, “because she is a tremendous educator. I’ve worked with her 15 years, and she always goes above and beyond. She’s also compassionate, which actually is the [Xaverian] value we’re highlighting this year, and she exemplifies the word compassion.”

Rich Magner, who retired at the end of the 2019-2020 school year after a lengthy career that included many years as Xavier’s Director of Guidance, is another former winner of the Ryken Award (2006). He was here for the big moment.

“She does way more than most everyone in the building,” Magner said. “She’s here early, here late, calls kids at home, holds kid accountable ... she puts kids on the right path. You couldn’t ask for a better person. I was delighted to hear she was getting it. She is a great choice.”

The Rev. David Choquette ’90 officiated the Mass, which was livestreamed to students who are at home learning virtually. He talked about St. Francis Xavier and Theodore James Ryken, who founded the Xaverian Brothers and for whom the award is named. Father Choquette said that when he was a student here he read “March On! God Will Provide,” a book about Ryken.

He spoke of the trust that Ryken and St. Francis Xavier, one of the great missionaries, each had that God would provide, that God would sustain them even as they worked with the uncertainty of not knowing how they would be perceived.

As we come full circle back to Beth Pattavina, we know one of the many things that keeps her marching on. The students.

“Working with the kids every day; taking them from where they are to where I think they can go,” Pattavina said.