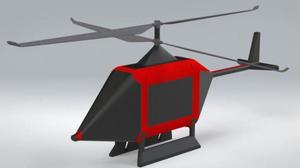 For the second time in four years, the Xavier Engineering team has won the CT Real World Design Challenge.

Since August, the team has been working on a helicopter-style package delivery drone, designing the delivery routes, writing a complete business plan and much more. And on Monday night, the team found out the hard work paid dividends. The Falcons are the CT champs.

In April, the group will compete for the national championship. The competition, usually held in Washington, D.C., will be done virtually as it was last year when Xavier qualified as a wild-card entry for its strong showing in the state competition.