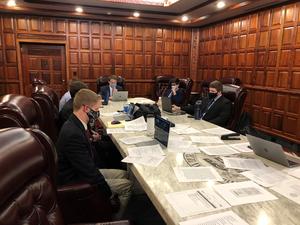 To The Next Round For Our Talented 'Legal Team'

Somewhere down the road one of these Xavier students might just be a lawyer. For now they are having a lot of fun acting like one.

The Falcons are moving on in Model Court competition after defeating Valley Regional and RHAM on Friday.

Because of COVID, this was a virtual competition. Much of the Xavier team was gathered in the Brother Boyle Conference Room in the media center. Normally all the participating teams would be inside an actual courtroom. The next round for Xavier is Feb. 26.

“I think the kids did fantastic this year,” moderator Aaron King said. “The kids had to do an awful lot of this on their own.  Marko Vidackovic and Tim Gagliano did a great organizing our practice sessions and keeping everyone focused.”

“We all worked together and helped each other ... and I am glad that all of our hard work has paid off so far,” Vidackovic said.

Gagliano ’21 was the closing attorney for the prosecution in the case.

“My role was to read the case materials and formulate a series of questions directed toward one of the prosecution side's witnesses, who happened to be a police officer,” Gagliano said. “I studied his affidavit and asked him questions based on his investigation. Then I examined the affidavit of a defense witness and came up with cross examination questions to ask them. This involved pointing out mistakes in their testimony. My final role was to deliver the closing argument for the prosecution, which is a 7-minute long statement detailing the prosecution side of the case.

“It was very strange not being in a courtroom, and it took away from the formality and professionalism that is apparent when it takes place in a courtroom. It did make it easier to impeach the witness, however. I felt as though there was much less pressure, and I felt more relaxed during it. I enjoy model court because I enjoy defending and arguing a position, and supporting a position through evidence and questioning.”

Vidackovic ’22 was the captain for the defense of the case.

“Leading up to the competition I was checking in with everyone ...  making sure everything was ready for the competition day,” Vidackovic said. “On the actual day of the competition I gave the opening statement, did a direct and cross examination, and I helped my co-lawyers with their claims and objections during the case. Overall I thought it went really well, even though we still have a lot of improvement left before the next competition.”