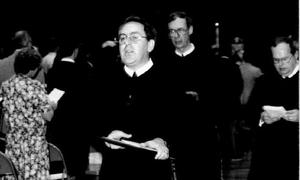 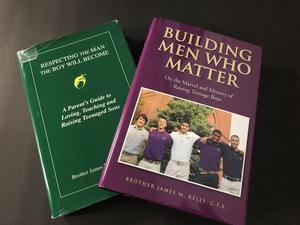 His Passion Was Helping Students, And Now The Fund Will Do The Same

In the spring of 1982, Brother James Kelly was preparing to become the next principal of Xavier High School by attending a convention of the National Catholic Education Association in Chicago. One of the speakers talked about writing monthly letters to the parents of boys at his school.

Brother Kelly not only adopted the idea, but he flourished, and these letters became must-reads. This would eventually lead to Brother writing two books, collections of what he had written to parents through the years.

Brother Kelly left Xavier in 1991 after nine years as principal. After Xavier he was president of St. Xavier in Louisville, Ky., and Mount St. Joseph in Baltimore. Before Xavier he taught at St. John’s in Shrewsbury, Mass.

His letters to parents combined his “Irish storytelling” techniques with wisdom and a firm message. He often would tell students: “Don’t do anything that will break your mothers’ hearts.”

As the years go on and there are fewer and fewer Brothers at the 13 Xaverian Brothers Sponsored Schools, memories of someone such as Brother Kelly might fade but will not go away. In a file here at school we not only have a collection of his letters to parents but his letters to faculty and staff. You can turn to any page of his two books and get some wisdom mixed with humor.

Those books will live on, and so will his name on a new Brother James Kelly Endowed Scholarship here at Xavier. Longtime friends are making sure of that.

The endowment fund will allow students to attend Xavier who otherwise might not have the opportunity. Others can contribute to the fund, too, clearly marking that it is for the Brother James Kelly Endowment Fund.

“Based on what we learned from Jim,” one of the friends said, “we started the fund because we want to support the teaching legacy of the Xaverian Brothers.”

Brother Kelly died in 2011, but if he were alive today we’re sure he’d have something witty to say about an endowment fund in his name.

“There might be some self-deprecating humor,” the friend said, “but probably genuine surprise. He would be glad for future students and would acknowledge that any good he had been able to do had come from his training with the Brothers and from his total faith and commitment to God. He would likely hope that even without new Brothers on the faculty, endowments would help to provide a supportive and caring teaching environment for boys well into the future.”

This is important to the friends.

“More than ever, the world needs educational institutions that focus on the intellectual growth and well-being of their students,” the friend said. “Unfortunately these schools are getting harder to find and, for many families, much harder to afford.”

When one of the friends was asked how do we best keep the spirit and values of Brother Kelly alive at Xavier, she responded in a way that he might have.

“It really isn't about Jim,” the friend said. “It is about the care and commitment of the generations of Brothers who have made this school possible. It is important to share with each group of incoming students memories of the Brothers and to provide an understanding of their legacy. If successful, each new class will learn the value of keeping the tradition alive for future classes.”

Back to the spring of ’82 for a moment, when Brother Kelly got the call to be the Xavier principal.

“I received a phone call from the Provincial of the Boston Province of the Xaverian Brothers informing me that I had been appointed principal of Xavier High School,” Brother Kelly remembered in one of those letters to parents. “Since he was my religious superior, I asked Brother James [Sullivan] for a few pious words to encourage me in my new position. He replied, ‘You’re 15 years younger than the next youngest Brother in charge of one of our schools. Some of my counselors think that you’re too young, but I appointed you anyway. Don’t screw up or you’ll make both of us look bad.’ ”

Brother Kelly said they always had sort of a father-son relationship. They were Irish, they were straight-shooters. And one day, Brother James happened to be at Xavier when Brother Kelly used what he described as salty language over the PA system. He received a letter, “chiding me for my language. The letter was firm yet fatherly. It closed with, ‘Well, Jim, I guess you can’t shine a sneaker.’ ”

In his final letter to Xavier parents in June 1990, Brother Kelly talked about such things as worrying about money and the maintenance of the building. He talked about doing the little things, like locking up at night or doing some shoveling. But he came back to this:

“The things that matter, the things that I will remember about my nine years as Xavier principal, are the people,” Brother Kelly wrote. “The members of the Xavier family. It has been my privilege to walk with many of these same families in some of the most difficult times of their lives. It also has been my privilege to talk with others in joyous times.

“When I stand before the judgment seat of God and He reviews my years as principal of Xavier, I doubt He is going to ask me about the balance sheet or the state of the physical plant. I suspect he is going to ask me if I did my best to shepherd this little portion of His flock. In all humility I will be able to answer, ‘Yes, Lord, I did. At times it didn’t seem good enough, but it was my best, and I did it with my whole heart.’ ”

That he did. And fittingly, Brother Kelly died on the Feast of St. Francis Xavier.