Helping Out At Home ... And Far Away From Home 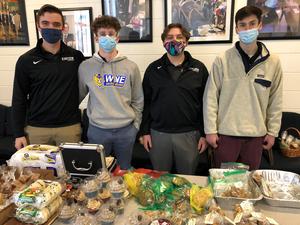 Senior Drew Errera was talking to his mother about the situation in Texas, which was ravaged by storms and cold weather in February. What could he do to help, he wondered. The Xavier senior took it to Director of Campus Ministry Peter Lyons, and it was decided to have a Xavier dress down day and a bake sale.

Between the two $1,795 was raised and sent to Texas through Catholic Charities, an organization that is 101 years old. Errera was living out one of the missions of the school.

“Helping other people, not just yourself,” Errera said.

Try to fill the need wherever it exists.

In Middletown … in the United States … in the world.

Xavier routinely takes a mission trip to Guatemala, but could not this year because of COVID. Niko Anastasiades and Eamon Conneely, who went on the trip last year, led the effort to raise money to benefit families in need in Guatemala. The one-day collection this month totaled $3,463.89.

“We enjoyed helping everyone last year,” Conneely said, “and it created a lasting impression of other parts of the world and how fortunate we are.”

“When you get there,” Anastasiades said, “it is tough to see the amount of poverty … we’re a lot more fortunate than they are, and they need all the help they can get.”

So that is why they led the effort to raise money. The need remains. Guatemala is the fifth poorest economy in Latin America and the Caribbean, with persistently high rates of poverty and inequality, according to the World Bank Group, which works to reduce poverty and build shared prosperity in developing countries.

That’s more than $5,000 raised in two events to benefit others.

The same could be said for the Xavier students.

Right now they also are in the midst of March Can Madness. All the canned goods and boxed items collected this month will go to the Amazing Grace Foody Pantry in town.

Middletown … the U.S. … the world … Xavier students helping wherever and whenever they can.