Life Is All About Choices 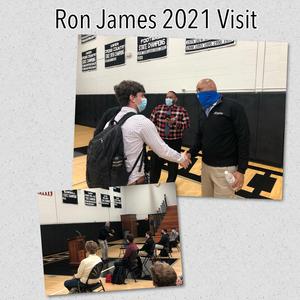 Ron James Made The Wrong Ones And Paid The Price. Now He Seeks To Help Others.

Ron James needs no microphone when he speaks. He’s expressive, his arms flailing, his words forceful.

James spent over 25 years behind bars. So now he travels the country telling his story, emphasizing that life is all about the choices you make. And the thing about making bad ones? They can snowball. He went from being in college to being addicted and homeless to being in jail.

So now he is committed to trying to keep others from making poor choices. James was in the Xavier gym Wednesday, as he has been previously, talking to the seniors who have just two months left in high school.

As James slid further and further down the slope no one wants to travel, no one really wanted to be around him. He was homeless. His feet were bleeding from blisters.

“It might 100 degrees outside and I’ve got a blanket around me,” James said. “It might be snowing and I’m in my boxers. I can’t explain it … it wasn’t rational.”

Life became all about one thing.

“I would lie … I would cheat ... I would steal … I would do anything to get money to get high,” James said.

Even pawn the engagement and wedding rings of his mother. She knew he took them but said, “You must have needed them more than me.” She also said to him that day, “Baby, I love you.”

“People didn’t want to touch me, they didn’t want to be around me, and this woman I robbed said she loves me,” James said. “My mother saw something in me that I didn’t see.”

His mother never got to see him become a published author, a speaker who travels around the country, a man who turned things around in prison. He read. He wrote, and that story, his story, allowed him to see what he had been and what he could become.

On this visit James also brought with him Jesse Davis, another man who had made wrong choices and had been in prison.

As each of them spoke, the backdrop was the wall of the gym where all the championship banners hang. This was not lost on Davis.

“One thing that stands out is I see many champions on the wall, and you are all champions. Remember to think, based on the decision I make, will I receive applause or consequences,” Davis said.

Davis also said not everyone has been as fortunate as himself and James, not everyone was able to make it out of the hole they dug for themselves. He praised God. So did James.

“Make your next choice your best choice,” James said.