A Big Thank You To The Xavier Teachers 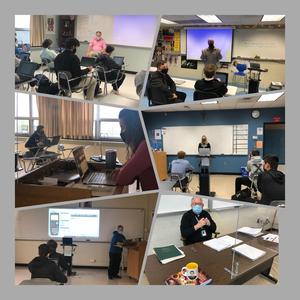 We stepped inside Mr. Garrity’s religion class at the end of the period and asked students to blurt out a word, one word, to describe Xavier teachers. We got an earful.

We also bumped into a few current students here and there along our travels and went back to the archives for quotes from alumni we had talked to in the past. Not unexpectedly, they strike similar tones.

“After four years they really shape you into a man. They get you doing what needs to be done, but they are kind … almost like a parent figure. They all care for you and want you to succeed.” -- Matt Battipaglia ’21, a Brother Celestine Medal award winner

“I would not have gone into the field of physical chemistry if not for my chemistry teacher, Bro. Joseph Pawlika, C.F.X.” -- Barry Hartnett, when he was here for his 50th reunion with the Class of 1969

“Teachers take extra steps, trying to help kids that need it … even if you don’t, trying to make you feel more comfortable.” -- Ryan Miner ’20, a freshman at Ithaca College

“They do a very good job preparing students, they’re really dedicated to their job, and I’ve had a lot of good teachers here.” -- Hayden Tomlin ’21, who last week was named a National Football Foundation Scholar Athlete

“Teachers are always here to help, whether it’s after school or before a test, and they really care about the students.” -- Student Activities Council treasurer Connor Silbo ‘21

“I think Xavier teachers taught me how to adapt to any situation, so I have been able to adapt to this unknown situation and tackle it head on,” -- Connor Dwyer ’19, last year when he was a freshman at Fordham facing the pandemic.

“I learned as much about civics from him as I did in three years of Political Science at UConn... but that’s just the tip of the iceberg. His compassion, candor, and devotion make him one of the greatest teachers — and greatest people — I’ve ever met.”  -- Van Augur, valedictorian from Class of ‘16 on current teacher Brother Thomas Ryan, C.F.X.

“They’ve all helped me in some way whether it be in the classroom or out of it. They’re great people.” -- Malcolm Wilson Toliver ’21, who will play football next season at Western New England.

From NationalCalendarDay.com:  Political and educational leaders began discussions for a day to honor teachers in 1944. In 1953, Eleanor Roosevelt persuaded the 81st Congress to proclaim National Teachers’ Day. Congress declared March 7, 1980, as National Teacher Day. The National Education Association continued to observe Teacher Day on the first Tuesday in March until 1985 when the National PTA established Teacher Appreciation Week as the first full week of May. The NEA Representative Assembly then voted to make the Tuesday of that week National Teacher Day.