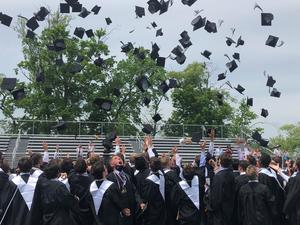 Class of 2021 Endured, Leaving Its Mark In Many Ways

What defines the Class of 2021 at Xavier? As usual, there are superior students, marvelous musicians, all-everything athletes.  But this was a class that handled everything thrown its way, and in a year COVID still dominated the landscape, it wasn’t easy. Yet these graduates carried on.

“I think you would all agree that over the past 14 months we have missed the normal day-to-day interactions with classmates, extended family, loved ones and friends through this pandemic,” Headmaster Dave Eustis told the crowd gathered on the football field for the 2021 graduation ceremonies. “However, we have endured. We have kept our relationships, we have utilized technology that we have never used before, we have been together, we have played sports, we have played music, we have done many of the things we have always done … we just learned to do them in different ways.”

You can watch the graduation HERE.

The major awards and honors from the 55th commencement at Xavier High School, during which 148 graduated:

The valedictorian for the Class of 2021 is Ryan Frier. His academic credentials as the No. 1-ranked senior are numerous and distinctive:  Brother Celestine Award; Bishop Hines Scholarship recipient; Harvard Book Award; induction into the National, Spanish, English, Science, Social Studies and Mathematics Honor Societies, the latter two of which he served as President; Distinguished Scholar commendation; enrollment in 11 Advanced Placement courses, six this year; a perfect SAT score, and National Merit Finalist which places Ryan in the top 1.2 percent of all high school seniors.

His official transcript is dominated by A+, 28 of them as final class averages from a total of 32.  He was a member of various clubs and played volleyball.

Outside of Xavier, Frier is an accomplished pianist trained classically for nine years and earned the highest mark as a ninth grader with the internationally respected Royal Conservatory of Music of Toronto.  He is also a gifted composer.

Wrote one member of the Xavier community: “I was very excited to learn that Ryan intends to enter the field of medicine. His industrious and meticulous nature suggest he will make a fine doctor. In fact, I would be quite content to see Ryan taking care of me during a medical emergency … Is Ryan Frier an amazing young man? Absolutely! Is he the best I have seen in my career? No question! And the best part is that he is an extremely nice kid.”

Frier intends to pursue a career as a physician as part of UConn’s eight-year BS/MD Special Program in Medicine. He also was presented the Math and Science Awards at graduation.

David Jerman is ranked No. 2 academically in his graduating class. Contributing to that distinction: Brother Celestine Award winner, the highest academic honor Xavier can bestow; National Merit Commended Student; Seton/Yale Book Award recipient; membership in the National Honor, Spanish, English, Social Studies, Mathematics, and Science Honor Societies, the latter of which he was Vice-President; Brother Robert Scholarship winner; enrollment in nine Advanced Placement courses, five this year; and over 20 grades of A+ on his transcript. He also was involved in multiple clubs and played volleyball.  Outside of Xavier he volunteered at an assisted living center and participated in Taekwondo.

Wrote one member of the Xavier community: “Naturally gifted and academically talented, polite, scholarly, personable, respectful, humble, mature, and highly motivated are just a few of the adjectives describing David. ... His commitment, responsibility, integrity, and passion for learning will no doubt serve him well as he pursues his dream of becoming a cardiologist next fall on the campus of Northeastern University in Boston.”

In addition to its highly regarded reputation as a school which promotes excellence in academics and service to the community, Xavier has earned an equally fine reputation in athletics – a reputation based not solely on wins and losses, but on the spirit and sportsmanship demonstrated by our scholar-athletes.  The Falcon Achievement Award recognizes a senior who, during his athletic career, has represented the very best that athletics stand for at Xavier. Chosen upon the recommendation of the faculty and staff, the recipient is a young man who embodies those qualities of loyalty, commitment, sportsmanship and hard work, which characterize our fine scholar-athletes.

Lappe will attend the University of North Alabama in the fall, where he will play baseball at the Division I level. He was a two-year captain at Xavier.

“This year’s recipient is a young man regarded with the utmost respect of our school community,” Principal Brendan Donohue told the crowd gathered for graduation. “He walked into Xavier with a strength of character not commonly found in a young teenager. One conversation with him quickly showed that he possessed a calm demeanor and an innate goodness. One is struck immediately by his sincerity, his dependability, and his humility.”

Lapp also was a Peer Minister, an Ambassador, a Big Falcon, and a member of Empower Leadership.

“Those who attended this year’s junior retreat were blessed to hear him witness to his own personal faith journey as a student, an athlete, and a man,” Donohue said.

The Xavier Loyalty and Service Award, the most prestigious award that the school confers, is presented to a member of the graduating class who is chosen upon the recommendation of the faculty and staff. Loyalty and service are qualities that Xavier High School strives to teach all its young men and they are crucial to the fulfillment of the school’s mission. The choice is based on the consistency and quality of the student’s service to the Xavier community and the passion and perseverance he has displayed in his commitment to all aspects that make up the experience of a Xavier High School student. Needless to say, such a student is one of the school’s most valuable assets.

“This year’s recipient will come as no surprise to anyone in our community,” Donohue said before announcing the name. “A dedicated and accomplished student, he is a member of numerous honor societies and has consistently challenged himself to greater and greater academic heights with a transcript showing multiple AP and ECE courses. Outside the classroom, he seemingly was everywhere. An XLI attendee and model Big Falcon, an Ambassador, Peer Minister, and member of the Senior Executive Board, he touched every facet of our school community with devotion, sincerity, and ingenuity.”

Delaney’s guidance counselor said, “Once he commits himself to a relationship, or a project, or an event, he is all in - with focus, loyalty, and determination. His positive disposition is very engaging. His loyalty to his family, friends, and the Xavier community is unmatched.”

He was one of six juniors selected to represent Xavier at the Xaverian Brothers Sponsored Schools Junior Retreat, and he was a senior leader this year at Xavier’s own Junior Retreat.

He will become an Emerson College Lion in the fall.

This year we have 17 alumni fathers of graduating seniors.  Headmaster Eustis presented to the younger graduate a ribbon on which hangs a medal of the Xavier seal.  The graduate then placed the medal and ribbon on the shoulders of his father.  Engraved on the back of the medal are the names of  father and son, and their years of graduation.

Mrs. Tomasiello is retiring after 24 years in the Xavier Guidance Department, the past year as its Director.

“In addition to describing her unparalleled work ethic, her fellow guidance counselors have praised her as caring, tireless, devoted to the students and Catholic education, innovative, loyal, patient, a great teacher, leader, mentor, and role model; a true friend, a wonderful colleague,” Brother Thomas Ryan, C.F.X., said at the graduation ceremony.

Brother Ryan also quoted from the Old Testament Book of Proverbs:  “She wraps herself in strength, carries herself with confidence, and works hard, strengthening her arms for the tasks at hand.”

Acknowledging that she also found time to be the intramural golf moderator, Brother Ryan said, “Hopefully, those strong arms will meet the task of many swings of golf clubs seeking that elusive hole-in-one in warmer climates.”