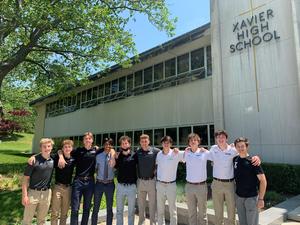 Sheel Vallam and Luke Solomon are seasoned class officers. They represented their sophomore class, then their junior class, but of course both years were sidetracked by the pandemic.

As is now customary, those running for various offices produce videos, which tend to be a combination of what the candidates will do for their fellow students and often combine creativity with a touch of comedy and upbeat music.

Vallam and Solomon told the student body they’d be approachable and available to hear what ideas others might have. They got endorsements from other students. They talked about pep rallies and movie nights, the junior and senior proms, the mixers for underclassmen.

“We Dem Boys” by Wiz Khaklifa was played as they walked the turf field near the end of their video.  They acknowledged what a challenge the 2020-2021 school year has been … with a light touch. The video ended with them coming out of the porta-potties, waving their hands and saying, “That was a tough year.”

Indeed it was. Their goal now is to make the next school year a memorable one for all. Vallam (president) and Solomon (vice president) will be the Students Activities Council leaders for the entire school.