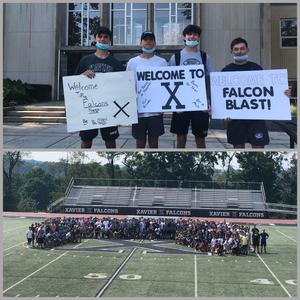 Launching Into The New School Year

Ease into the year … and then dive right in.

The annual Falcon Blast, which welcomes freshmen as the get to know the school and their Big Falcons, is a combination of fun and games, ranging from air hockey to miniature golf, from basketball and Frisbee to the always-popular Adrenaline Rush II, Next Generation, inflatable obstacle course.

Next week will be freshman orientation; Sept. 2 is the first day of classes for all students. But Wednesday was a way for the freshmen to ease into the year and a way for the seniors to help them do just that. Not that long ago these seniors were stepping into the building for the first time. Now they know every inch of it.

“Everyone comes out here and has a good time, and gets to know each other a lot better; it’s important,” senior Kevin Gilhuly said.

Once the school year starts, though, it’s time for the freshmen to dive right in. Year after year, that is the advice of seniors, older and wiser if you will.

“Jump right in as soon as you’re here,” Gilhuly said, “to get the most out of it.”

The day would not end early for Giluhly, who plays football in the fall. Xavier had a scrimmage later Wednesday.

Gilhuly recently attended the Xavier Leadership Institute (XLI), a program for seniors in its 50th year. In due time, many of these freshmen will do the same.