Freshman Retreat: Getting To Know A Little About A Lot 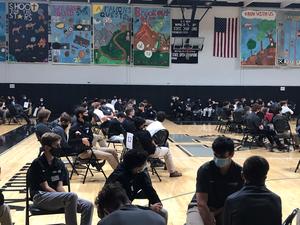 One of the exercises at the Freshman Retreat is “Getting To Know the Xaverian Values.”

Working in groups the freshmen arrive at a definition of the values of humility, trust, simplicity, zeal and compassion. One of the freshmen from each group then gets up in front of all the freshmen as well as all the Peer Ministers who help with the event and gives that definition. That’s not the easiest thing to do as a freshman, and Campus Ministry Director Peter Lyons, who heads up the retreat, recognizes all the freshman who got up to speak. One of the things Xavier will do in the course of four years is nudge you out of your comfort zone, and these freshman have already experienced that.

The day is all about getting to know … the school ... the values … Christian service … yourself … Theodore James Ryken … the XBSS Network … and God. It is getting to know a little about a lot, and all of it becomes even more clear as time goes on at Xavier. The Class of 2025 is introduced to the Campus Ministry program and the customs and rituals of Xavier's spiritual life, such as team building, group discussions, prayer, reflection, and inspirational talks.

Peer Ministers, all of whom must be seniors, give an example of Christian service just by what they are doing on this day. They are servant leaders, helping others, in this case the freshmen. Mr. Lyons points out that each morning starts with prayer, and Tuesday through Friday that prayer is led by a Peer Minister. The Monday prayer comes from Headmaster Dave Eustis. It is the Simplicity Prayer written by Brother Philip Revell, C.F.X., this summer to highlight our value of the year, which is Simplicity.

Peer Minister Nicholas Cusano ’22 talked about that value to the students. He raised up two historical figures and one person at Xavier that to him exemplified simplicity: the writer/philosopher Henry David Thoreau, Jesus Christ, and Brother Thomas Ryan, C.F.X.

Cusano said Thoreau “demonstrated an unbelievable commitment to justice, thought, and how to respond to evil.”

Of Jesus, “He entered the world humbly, lived life simply, and left this world with only his word and actions for us to remember.”

Of the Xaverian Brothers and Brother Ryan: “The Brothers teach at Xavier, eat at Xavier, sleep at Xavier, and dedicate their lives to Xavier. Brother Ryan is no exception ... he lives a modest life, one that has benefited thousands of Xavier students. He is always doing something for us.”

Cusano left the microphone by expressing this last thought, saying that the way to connect with God is at times to disconnect from our world. Not people, but possessions, such as that ever-present phone or Xbox.