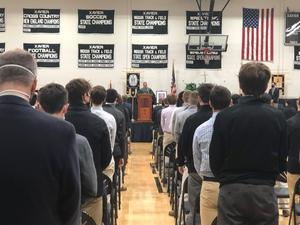 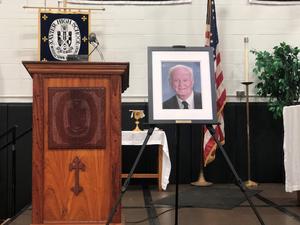 His Respect For Life An Example To All Of Us

Brother Thomas Ryan, C.F.X., spoke at the end of the Mass, offering a tribute to his lifelong friend. The stories Brother Ryan told spoke of Brother Houlihan’s energy, enthusiasm, commitment and caring. Brother Houlihan not only ran the MYARC program, in which Mercy and Xavier students volunteered, but he was such a big part of everything. A DJ at the dances, Santa Claus at the Christmas party. That was Brother Houlihan. Right in the middle of it all.

For years he collected bottles and cans to be redeemed, the money supporting MYARC. Brother Ryan said he could not help but think of his good friend recently because a new Connecticut law will lead to an increase in bottle redemption values from 5 to 10 cents. “He would have loved that,” Brother Ryan said.

The celebrant of the Mass was Rev. David Choquette ’90, who spoke of Brother Houlihan’s deep respect for all lives, and that we are all called to respect the gift of life that God has given from beginning to end.

“As we gather as a Xavier community we realize we are called to do our part to show our respect for life in every interaction we have with one another,” Father Choquette said. “We are called to be a people of respect … we are called to respect each and every person we come in contact with.”

Juniors and seniors were in the gym for the Mass. Freshman and sophomores watched it through a livestream.