Serving Those Who Serve Us 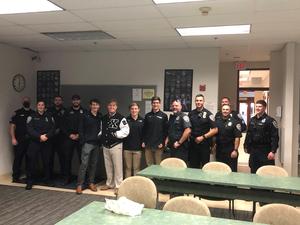 Four Xavier seniors --- Chris Beaudoin, Mitchell Wollen, Jack Roy, and Marko Vidackovic – got up earlier than normal on Oct. 29. They are part of the community outreach committee of the Senior Peer Ministry team.

The four students, accompanied by Campus Ministry Director Peter Lyons and Principal Brendan Donohue, served an appreciation breakfast at the Middletown Police Department. It was an act of service to those who day in and day out provide a big service to the community. Many Xavier graduates are officers in the department.

The money for both breakfasts was raised by the Xavier student body, those taking part in the Xavier Apparel Day on Thursday. For $5 students get to shed the shirt and tie for a day. It’s a win-win situation.

A breakfast for firefighters at the South Fire District Station will be served at a later date. The idea to give breakfast to firefighters and the police came out of 9/11.

“Mr. Lyons, Keegan Truscinksi and I went to the 9/11 ceremony at the South District this year,” Wollen said. “After that Mr. Lyons and I were throwing around ideas of doing something for the police and firefighters for what they do for the local community.”

Roy didn’t mind getting up a bit early, either.

“Police have been put in a bad light,” Roy said. “Forces such as the police need more appreciation, so I think going there and doing that act of kindness … it was great to see; they were so thankful and a lot of times people don’t appreciate them enough.”