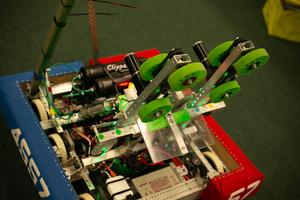 In recent years, the FullMetal Falcons have become one of the top robotics clubs in New England.

The FullMetal Falcons, Team 4557, has been competing in the FIRST Robotics Competition (FRC) since 2013, winning multiple New England District awards and recognition at the FIRST World Championships in Detroit in 2018, in which 15,000 students competed.

A sampling of awards won over the years by Xavier:

And now the Xavier robotics brand seemingly is everywhere: