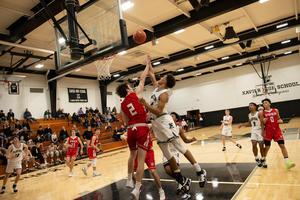 It is not Winter Break without a few games on the hardwood and a trip down memory lane with the legendary Kohs family.

Step into the Xavier High School gym for two nights of basketball in December and what you’ll find is alumni from various years, including some former players, watching the latest version of a holiday  tournament that has had its share of classic games.

For years, Artie Kohs sat in his usual seat near the end of the Xavier bench. Kohs, for whom the gym and the tournament are named died in 2022. He was the school’s first basketball coach and athletic director when the doors opened in 1963.

This event is about raising money for a scholarship fund, and it’s about quality basketball, but it’s also about coming home.

“It’s a great tradition for many Xavier alumni who come back each year not only to support Xavier, but also to catch up with their former teammates, coaches, and classmates,” Xavier coach Mike Kohs said.  “We have alums from the first graduating class to recent graduates, and everywhere in between, who enjoy the opportunity to come back and visit during the event. Getting the chance to reconnect with so many alumni is a big part of what makes the tournament the special event it is.”

Xavier won the 2019 tournament and while not every year has that storybook feel, this one certainly did. It was Mike’s 300th win as Xavier coach; the Falcons beat Glastonbury 47-41 in the title game. The leading scorer for Xavier: Stephen Kohs’ 20 with 13 points. So there they were: grandfather, son and grandson able to celebrate a family moment.

“Our team won the championship for the first time in since 2015, which also happened to be my 300th career win as Xavier head coach,” Mike said. “But more importantly, my father was there, and he watched Stephen, a senior captain, help lead X to the championship and also be named to the All-Tournament Team.  It was a tournament to remember for the Kohs family.”