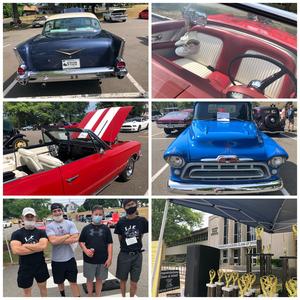 The EJK Classic Car Show, postponed from early May, was held Saturday, June 27, with more than 60 cars showing up.

The EJK Classic Car Show was supposed to be held in early May, but COVID-19 prevented that from happening.

The annual car show, which benefits the Eric J. Kalber Scholarship Fund at Xavier High School, may have been postponed bit it would not be canceled. It was held in the front parking lot of Xavier on Saturday, June 27.

More than 60 classic cars showed up for the social-distancing event. And those cars evoked days gone by. One had dice hanging from the mirror. Many had hood ornaments. Some had whitewalls. Good old-fashioned chrome was everywhere. So, too, were big, beautiful engines.

Our favorite license plate from the day: “OUR TOY.”

The event raised a few thousand dollars for the scholarship fund. Kalber was a 2004 Xavier graduate who died in a car accident in 2005.

One of the classic vehicles there Saturday was a 2002 Jeep Wrangler owned by Steve Johnson ’78, uncle of Eric Kalber. Eric took his driving test in the Jeep.

Johnson, along with the student members of the Classic Car Club at Xavier, was a driving force behind having the show this year despite restrictions due to the coronavirus. There were no food trucks or raffles, but there was a good crowd and plenty of great cars. There also were trophies, awarded by the Xavier students in the club.

“It’s very important to keep the show up and running for sentimental reasons,” Johnson said in early June as planning was continuing. “I’m sure it will be back to normal next year.”

He also had said that he thought plenty of people “were itching to get their cars out there.”