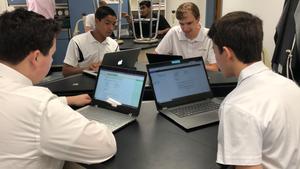 More than 400 Xavier students persevered and made the year-end Headmaster's & Principal's List in a year that ended with online distance learning.

Persistent and consistent. Driven and diligent. Just a few words to describe the 413 Xavier students who in the 2020-2021 school year made the Headmaster’s List or the Principal’s List.

To do this, a student must be on his game  … day after day, month after month. The criteria for the Headmaster’s List, reached by 192 students, including 41 who graduated in May, is a year-end GPA of 3.75 or higher, with no course average below B.

Another word to describe these students: persevering. After all, by mid-March they were doing online distance learning.

Many of these students were challenging themselves through Advanced Placement or UConn Early College Experience (ECE) courses and participating in extracurricular activities. So yet another adjective comes to mind: tireless.

“I think it says just as much about Xavier’s families as it does its students,” Academic Dean Kyle St. George said. “Online learning was tough for everyone. The fact that our students performed so well despite distance learning shows that our students have strong support structures at home. It also shows that they were able to remain focused and diligent despite great adversity.

“This revealed their character. Xavier’s motto is ‘Be a Man,’ which can be interpreted many different ways. To me the motto means to do the right thing always. Our students certainly showed their adherence to our motto this past year. Our students continued to be accountable, reliable, ambitious, and committed despite circumstances that very easily could have been used as an excuse to throw up their hands. For this, I’m proud of them.”

The 2020 graduating class also had 39 Brother Celestine Medal winners. This award goes to students who, upon the completion of the academic year, have an overall final average of A with no final average grade less than an A- in their major subjects. This award, which a student can be given only once during his four years at Xavier, is the highest academic tribute the school bestows. Thirty-four members of the Class of 2020 had been honored in the previous three years and five more members of the class were honored at the Baccalaureate Mass, having achieved that status as seniors.

Celestine award winners for the Classes of 2021, 2022, 2023 will be announced at the beginning of the school year in September.