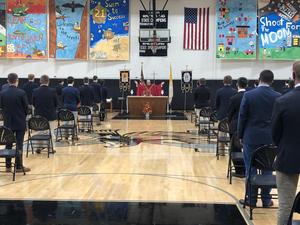 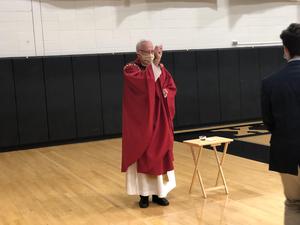 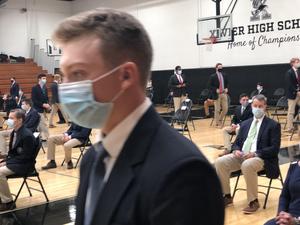 Father Frank Gilbert officiated the Opening of School Mass on Monday morning at Xavier High school, from which he graduated in 1974. He said it was an honor to be back, and that sentiment went both ways.

Father Frank was standing in for the Most Reverend Michael R. Cote, Bishop of The Diocese of Norwich, who was unable to attend. The Mass was livestreamed into all Xavier classrooms with students who were receiving various academic awards seated in the gym, where the Mass was held.

Father Frank got to announce, to the usual ovation, that the Bishop had granted the Bishop’s Holiday, a day off from school at the discretion of the headmaster, Dave Eustis. As is also custom, Xavier gave a gift to Father Frank. Befitting the times, he not only received a Xavier sweat shirt from his alma mater but a Xavier mask.

As also is tradition at the Opening of School Mass, students were publicly recognized for their outstanding academic achievements in the 2019-2020 school year.

These were awarded to those students who earned the highest grade point average in their class in the 2019-2020 school year.

Each year about 1.5 million students enter the National Merit Scholarship program by taking their PSAT in their junior year. Of those students about 16,000 are recognized nationally as semifinalist for their outstanding performance. This year Ryan Frier was named a National Merit Semifinalist.

Each year the Brother Celestine Medal is awarded to students who have an overall final average of A, upon completion of the past academic year, with no final average grade less than an A-minus in their major subjects. This prestigious award can be earned only once during a student’s four years at Xavier, and is the highest academic tribute the school bestows. Brother Celestine Killigrew taught history and religion, coached the freshman soccer team, and ran the bookstore at Xavier in the early 1960s.  He died at the age of 25 as a result of injuries sustained in an automobile crash. The award was created to honor this beloved teacher’s memory. He had a big impact on the school in such a short amount of time.