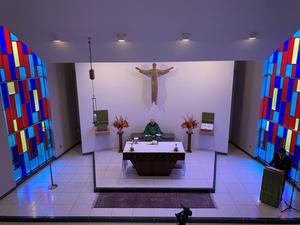 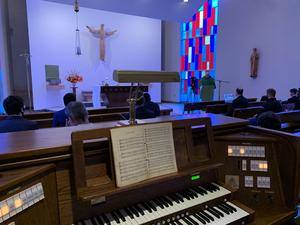 October is “Respect Life” month in the Catholic church, and Father Ernie Bedard from St. Pius X Church in Middletown came to Xavier on Tuesday to celebrate the school’s monthly Mass.

The Mass, held in the chapel with some peer ministers participating, was streamed into classrooms.

“Every life has hope and possibilities,” Father Bedard said.  “Today we are praying for the respect of all life.”

During his homily he raised up the life of a young man who died at a young age yet had a profound impact on the world, so much so that he was beatified on Saturday in Assisi, Italy. Carlo Acutis died of leukemia at the age of 15 in 2006.

Acutis used his gifts and talents in technology to benefit others. A story on the Vatican website said that Acutis, at the age of 11, began to investigate the Eucharistic miracles in in history. He then created a website that has been used by used by more than 10,000 parishes in the world.

Acutis had a love of God from a young age, despite his parents not being religious and rarely attending Mass. “His parents eventually became devout Catholics because of their son,” Father Bedard said.

A son who made a big impact in a short amount of time.