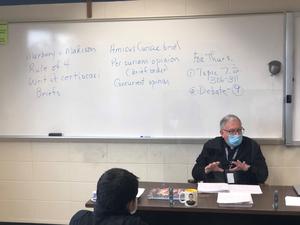 Don't Know Who Ben Wade Is? You'll Find Out

Brother Thomas Ryan, C.F.X., walks up and down the aisles handing out tests rather than having the students take one and pass them along. “This is how I get my exercise,” he says.

This first civics test of the quarter as the calendar turned from September to October had topics such as the Supreme Court, impeachment and the filibuster. Brother Ryan prepares his students well for tests, so he was shaking his head when some students recently asked him who Ben Wade was.

Had Andrew Johnson been impeached, Wade would have replaced Johnson for the rest of his term. Wade was the president pro tem of the U.S. Senate. With apologies to Bro. Ryan, I didn’t know who Ben Wade was.

But I do know who Brother Ryan is. The type of teacher we’d all like to have.

A case of soup sits on Brother Ryan’s desk. This is the first Friday of the month, when the school conducts its canned food drive to benefit the Amazing Grace Food Pantry in Middletown. For those who might have forgotten to bring in something, Brother has them take a can.

As the class nears the end he sprays each desk with disinfectant, as is customary in each classroom after each class as part of COVID-19 protocol. “My favorite part of the day,” he says with his dry sense of humor.

He walks up and down the aisles as each student takes one piece of paper towel. “If I had a dollar for every role of these we have, I’d be a millionaire,” he says.

Brother Ryan has been teaching since 1971. Except for four years (2004-2008) when he was the head of the Xaverian Brothers retirement home on the campus of St. John’s Prep in Danvers, he has been in the classroom. That includes two stints at Xavier, 2008-present and 1993-2004.

He describes his teaching style as “somewhat Socratic. I ask a lot of questions and try to engage as many boys as possible.”

He has an encyclopedic mind when it comes to important Supreme Court cases and various terms relating to our court system. Yet he is not about to tell the students everything; he peppers his teaching with questions and there generally is no shortage of students willing to venture an answer. It keeps things lively, and if things start to slip, without skipping a beat, he might just tell the class to sit up straight.

On this day, written on the whiteboard is that night’s homework, a short reading with a quiz the next day. He also tells the students to watch some of the vice presidential debate if they can.

The talk turns to the first presidential debate and a student asks if Brother Ryan saw the Saturday Night Live parody of that Biden-Trump debate. He did not. It’s on too late. “I never watched Johnny Carson, either,” he says. “I guess I’m an anachronism in that sense.” He moves on. Who knows how many of his freshmen know the name Johnny Carson.  But they better know Ben Wade.

His classroom walls are filled with magazine and newspaper stories and headlines and political cartoons. Civics is a graduation requirement at Xavier, as it is in the state’s public schools. We wondered what Brother Ryan wanted his students to carry forward with them. He has a list.

“Register to vote when you are 18 and vote.  Watch the first 10-15 minutes of any national TV evening news program.  Study the footnotes of history; they are usually the most interesting.  Read ‘Dreamers of the American Dream’ by Stewart Holbrook and ‘When the Cheering Stopped’ by Gene Smith.  Appreciate the fact that this country has endured major setbacks and catastrophes but will endure.  Keep an eye on Supreme Court cases; some are fascinating.

“And keep a warm spot in your hearts for Thelma Todd and Annette Hanshaw.”

Even if Todd and Hanshaw won’t be found in your Civics book.

Yes, there are a few photos of them in the room as well as a corner devoted to trains. He is moderator of the Railroad Club. The accomplished conductor of a classroom has ridden the rails for years.

In his earlier days of teaching Brother Ryan also taught freshman English along with social studies. He can spot a flaw in sentence structure from a mile away. And it’s that part of his teaching career that brought forth this.

“A crazy memory,” Brother Ryan said. “I did freshman English for 20 years along with social studies.  I’m a great believer in diagramming sentences, as it is the best way to learn grammar, and I pounded diagram procedures into their heads.  A few years ago a grad from the 1970s emailed.  He was on the board of a private school in Worcester County (I had had him at St. John’s in Shrewsbury).  It was his vote that convinced the board to keep diagramming in the English curriculum at that school.  He fondly remembered his frosh English class.”

And it’s likely many of us will fondly remember the name Ben Wade.