A Global Perspective In Today's World 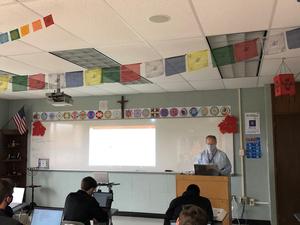 "We live in a mobile society; therefore, we must engender a spirit of true compassion to our fellow human beings.”

It is more difficult to love thy neighbor if you don’t understand your neighbor. And in this global world, where technology connects us more than ever, anything that helps us understand our neighbor – who may live miles and miles away – is a good thing.

Since 2015 an elective religion course at Xavier is called “World Religions. A Voyage of Discovery.”

“I love the fact that we have a World Religions course,” Religion Department Chair Jeremy Fowler said. “I think it’s important for not just our students, but all people to recognize the image similarities between so many different faiths that exist in our world.

“And because peoples’ faiths are such a deep part of who they are, it is vital for students to have some understanding of the background of others in order to truly care for them in our community.”

The course syllabus lists nine course objectives, ranging from helping students understand their religious beliefs and practices in light of other religions to exposing students to various techniques used in meditation.

“There is much we can learn from one another through dialogue,” said Jim Tyrol, who teaches the World Religions course. “This course gives the students a basic understanding that we all come from different walks of life and that empathy and dialogue foster healthy and proper relationships.

“I also think it is important to teach the students to be nonjudgmental, to build bridges and not walls, and come together to promote peace and justice, among the world religions. We live in a mobile society; therefore, we must engender a spirit of true compassion to our fellow human beings.”

Step inside Tyrol’s classroom and there is no mistaking this is a world religion course.

Another religion course at Xavier, “Living Justice and Peace,” also makes us think and care about our neighbor.

The course description in part says that it “will help you to examine the relationship between faith and the reality of the world in which we live. The Catholic Church has, over the last 150 years, developed a corpus of Social Doctrine, which initially examined the relationship between capital and labor, and which most recently has addressed such issues as human rights and problems of ecology.”

So much has changed in the world, yet often times maybe not as much as we think.

“In 1890 Pope Leo XIII wrote Rerum novarum, an encyclical in which he addressed the competing claims of liberal capitalism and socialism, the role of the state in intervening in economic life, and the importance of justice for the worker and respect for his rights, starting with a just wage,” said Brother Philip Revell, C.F.X., who teaches the justice and peace course. “The questions addressed in Rerum novarum are in many respects just as valid today as they were over 100 years ago.”

So, in the course, “questions of war and peace, the Cold War and international relations are considered with special reference to the economic and social causes of conflict,” Brother Philip said. “Peace is presented as the fruit of justice as Pope St. Paul VI taught.”

It is Brother Philip’s goal that at the end of the course students “have insight into the socio-political/economic issues that should be of concern to us as Catholics: work, housing, health care, education etc. I hope that they can see beyond their own reality to appreciate conditions in less fortunate areas of the U.S. and the world.

“Most of all I want them to understand that action on behalf of justice is first and foremost a biblical imperative: Jesus quotes the prophets when he says, ‘What I want is mercy, not sacrifice.’ They should understand that the corporal works of mercy: feed the hungry, clothe the naked, etc., should lead us to action but also ask ourselves and our society why hunger exists in the world.”