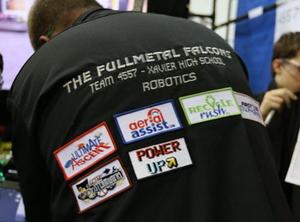 Staying Connected In A Virtual World

There’s a lot to learn about the Xavier High School robotics programs, and it goes well beyond building a robot that can do certain things, as if that is not enough.

FIRST Robotics, of which Xavier is a member, challenges and develops students in so many ways.

Yes, we have COVID-19 hurdles, but that just meant new challenges to be met head on for the robotics captains, Spencer Thompson ’22 and Chris Andrei Abarientos '22. They put together an informative video that illustrated what the robotics program has to offer. They also sent out a survey that not only explained the various levels of the program but sought to find out what interested potential newcomers. There could be about 20 new members this year.

There are four levels.

FRC (First Robotics Competition): The team competes in two district events in the spring and the team meets Monday through Thursday and Saturday during the intense build season January through March. The robots weight in excess of 100 pounds. There will be no FRC season for Xavier because of COVID-19. The Falcons will be concentrating on the FTC level.

FTC (First Tech Challenge): The robots are smaller (40 pounds), and the team meets twice a week in build season. There are two to three district events that can qualify a team for the state competition.

“Last year we had two teams, and with an influx of new members we’re thinking about expanding beyond that,” Thompson said.

When the first competition will happen is up in the air now as teams are being given more time to get accustomed to the virtual environment. The team is working on what the robot will look like and what its capabilities will be.

FLL (First Lego League): Xavier students serve as mentors for students ages 9-14 as they build a robot that performs tasks on a 4 by 8 table.

FLL Jr. (First Lego League Jr., which this year is called Explore): For ages 6-10; Xavier students start and run these teams.  They have done so in Higganum, Portland and Cheshire.

FIRST is an acronym: For Inspiration and Recognition of Science and Technology. And our robotics team members certainly are inspirational … and aspirational. Many head to college seeking engineering degrees of some sort.