John Halligan Speaks About Bullying, And His Son's Suicide 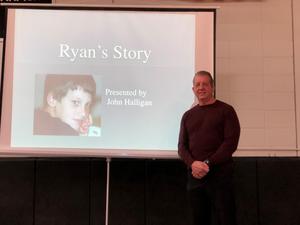 Anger And Hate Morph Into A Butterfly Of Hope And Forgiveness

When you listen to John Halligan tell the story of his son’s suicide, which he has been doing for years now, over and over, you can feel and see his pain. It will never go away.

His 13-year-old son took his own life after being bullied online and in person since fifth grade.

But if Mr. Halligan can reach just one student in the audience, it’s worth it to him. There are so many messages as he talks, and they begin and end with doing the right thing, being a good person. If you see someone hurting, help them. If you see someone being a bully, be an “upstander and not a bystander,” in other words stand up to the bully because saying nothing is being complicit. And if you’ve ever bullied someone, been mean to someone, step back, think about the hurt it can cause.

As Mr. Halligan spoke to the freshman class and transfers Tuesday morning, photos of his son played in the background.  A kid being a kid, in a swimming pool, in front of a birthday cake, images not unlike those of a million other kids. Yet here we are in 2021 and images of Ryan stopped when he died in 2003.

At one point when Mr. Halligan talks he mentions a teacher who impacted his life. He comes back to that at the end. When he was a senior in high school, his art teacher walked in to the room one day with tears as she had just learned that a former student had committed suicide. But she told the class that you can always turn an ink blot into a butterfly, that something good can come from something horrible.

And so Mr. Halligan shares his story with students and parents year after year.

He is not a bystander, in more ways than one. In memory of his son, he spearheaded the Vermont Bully Prevention bill signed into law in May 2004, shortly after Ryan’s death. He also led the effort to pass a law pertaining to mandatory suicide prevention education in public schools in April 2006.

Mr. Halligan has turned anger and hate into that butterfly.