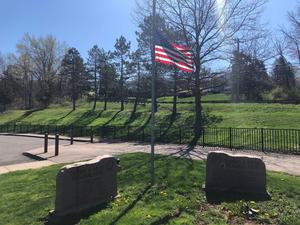 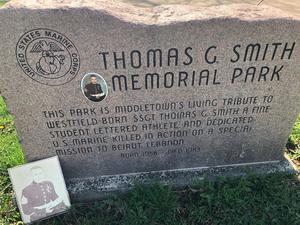 Almost 40 Years After His Death, 1976 Grad Still Touches Lives Of Many

“When I take my daily walks, I frequently do a loop at St. Mary's cemetery and pass his gravesite. There is a picture of Tommy on the headstone in his Marine uniform. Never fails to bring back memories of what a great young man he was,” says Rich Feitel, the former Xavier teacher, coach and director of alumni and development.

Staff Sgt. Thomas G. Smith, Xavier Class of 1976, died in service to our country on Oct. 23, 1983.  Lebanese terrorists drove a truck packed with explosives into the U.S. Marine barracks in Beirut, killing 241 U.S. military personnel. Smith had reenlisted after already having served a tour of duty overseas for three years, including 18 months in Beirut.

For years at Xavier, students have been the recipients of the Staff Sgt. Thomas Smith ’76 Memorial Scholarship. It is one of many endowed scholarships at the school, this one like some others borne out of tragedy. The first scholarship was awarded in June 1985; it recognizes “a student entering his senior year who best exemplifies the spirit, values and qualities” of Smith.

Smith was a member of track and field at Xavier.

“Tommy was a real nice kid,” Feitel remembers. “Very quiet and unassuming. He was a sprinter and usually ran the 220, 440, and relays. You could always count on him to give his best effort in any event in which he participated. That's why Coach [Bob] Michalski and I trusted him so much to be part of the 4 x 220 and mile relay teams.

“I remember that after joining the Marines, he would come back to Xavier to visit when he was home. Always wore his uniform. He was so proud to be a Marine. Everyone at Xavier was devastated to hear that he was killed in the attack on Marine headquarters in Beirut. One of the saddest days of my life.

“Shortly thereafter, his dad, mom and brother Joe met with me to establish the scholarship fund. Many members of the Class of 1976 made initial contributions, as did many friends and family members. It was a wonderful tribute to Tommy who made the ultimate sacrifice for his country.”

In 1994 the Thomas G. Smith Park in the Westfield section of Middletown was dedicated. The park offers active and passive recreation, from a picnic pavilion to a playground for children to nature trails and athletic fields.

Now, all these years later, so many students have benefited from the scholarship fund, and so many families and children have built memories from days at the park.

"I just can't say it in words, how much love we feel for everyone involved," Smith's mother, Angela, said about the park dedication ceremony in a 1994 Hartford Courant story. "And to know that everybody's going to remember Tommy, not just us … that's the greatest feeling."