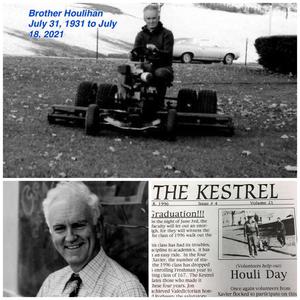 They were known as “Houli Days.”

Raking, mulching, fertilizing, cleaning up the grounds at Xavier.

Bro. Robert Houlihan was the leader.

On Sunday we lost that leader, that great and inspirational man when he died just short of his 90th birthday and after nearly 72 years as a Xaverian Brother.

He was a tireless man.

He started MYARC (Middlesex Youth ARC, Inc.), a volunteer service organization dedicated to the philosophy that growth and personal development occur as a result of social interactions between persons with intellectual disabilities and the students of Xavier and Mercy High Schools.

At one point he filmed football games for coaches Larry McHugh and Tony Jaskot.

He sold candy bars at games, collected cans and bottles, all with the mission of raising funds for MYARC.

He took care of the grounds at Xavier. A profile of Bro. Houlihan in the Middletown Press in 2012 said: “He can hear a paper hit the ground from a hundred yards. Thus, the place is as clean as Disney World.”

That is apparent by the many comments on our Facebook post announcing Brother Houlihan’s death. They broke the mold, said one when learning of his passing. So true. He was one of a kind … and so vary kind.

For all the comments go to facebook.com/XavierHighCT