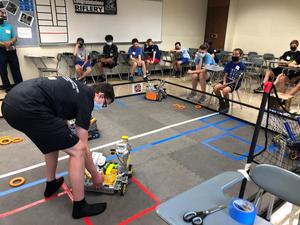 Some of Xavier's Success In Robotics Stems From These Camps

Each year the Xavier reputation in robotics circles grows.

The program had another successful year in 2020-21. For competition matches, three of the school’s teams placed in the top five. The FullMetal Peregrines won the Control Award for their algorithms and software design. And Aidan Muldoon ('22) of the FullMetal Kestrels was one of two Dean's List Finalists from Connecticut.

Many of the students who join robotics when they get here have attended a summer robotics camp at the school, which is happening this week. About a dozen youth are here.

“We want to inspire a passion for STEM education,” Spencer Thompson ’22 said in the courtyard as the campers were doing an icebreaker activity.  “And we want to expose them to technical skills such as design and engineering and more broad skills like teamwork, team unity, and persistence.”

Thompson joined the robotics program as a freshman. He said he remembers coming to an Open House at the school and seeing this massive robot and thinking how cool it was.

“We want the kids to be engaged, and from what I have seen this week the kids are really enjoying it,” Thompson said.

He is one of many in the robotics program helping with the camp. Brendan Bell ’05, a religion teacher, is the moderator. The camp ends Friday with activities ranging from the campers finishing their mini-robots/programming activity in the library and building/shooting rockets in the courtyard. Then there is a medal ceremony complete with gold medals that the robotics team designed and 3D-printed for each camper.