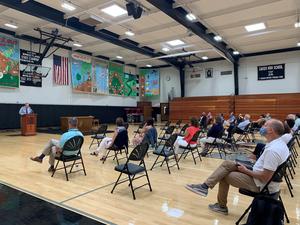 Welcome to Xavier … and welcome back to Xavier. There is a dual theme to the new hires at Xavier for the 2021-2022 school year. There are four new faces and a couple of familiar faces. On Thursday and Friday, the faculty and staff held their annual retreat and meetings where everyone was introduced. Or in some cases reintroduced...

Diana Mastrocola, Guidance Department: Diana holds a BA in English Literature and Sociology and an MA in School Counseling from Boston College. Since 2013, she has served as a college and career counselor at both City on a Hill Charter School in Roxbury, MA, and Achievement First High School in Hartford.

Matthew McCaffrey, Director of Enrollment Management: Matt holds two Bachelor degrees from Wilkes University in Pennsylvania in both Elementary Education and in Psychology and an MEd in Educational Development and Strategies, also from Wilkes. Holding various roles in education since 1994, he comes to us most recently from Canton Montessori School in Ohio where he served as head of school. Originally from Cheshire, he has returned to his roots with his family.

Scott Nelson, English Department: Hailing from near Waco, TX, Scott holds a BS in Secondary Education from Texas A&M and a JD from South Texas College of Law. After an early career in education, he spent nine years practicing law in Texas before returning to the classroom in both Texas and South Carolina. He has more than 20 years’ experience in the classroom and as both a basketball and football coach. Scott will be teaching three sections of World Literature and two sections of American Literature. He also will moderate the Debate Team.

Joe Premus, Math Department: Joe holds a BA in Mathematics from Boston College and an MA in Education from the University of St. Joseph. After a career in the corporate insurance world, Joe made the switch to education in 2010 and has been teaching ever since, most recently at Thomas Edison Magnet School in Meriden. Joe is teaching one section of Pre-Algebra and four sections of Algebra I.

Mason Passavant, History and Math Departments: During the 2020-2021 school year several alumni helped out as Xavier navigated Remote learning. Mason was one who did that, and this year he is taking on a full teaching load with three sections of Civics, a section of Algebra I and a section of Algebra II. Mason graduated No. 3 in the Xavier Class of 2012, and he has a BA in Philosophy with a minor in Government from Georgetown University. Over the last few years he has devoted much of his time to private tutoring and test prep. In addition to his classroom role last year at Xavier, he also helped with the crew and frisbee programs.

Jayne Vitale, Fine Arts Department:  After a one year of “retirement,” Jayne is back. She will be teaching  art classes in a part-time roll and moderating the art club. She retired after the 2019-2020 school year after 34 years at Xavier but has returned, a benefit to the school and its students. She impacted a lot of lives in those 34 years. Wrote one person on Facebook after we had written a story in 2020 on her retirement: “Hands down, one of the best souls I have ever encountered!” Always present and always involved in all things Xavier. She has shaped many young men over the years and each of us is better for having her as a teacher and mentor.”