Opening of School Mass Celebrated by The Most Rev. Bishop Michael R. Cote 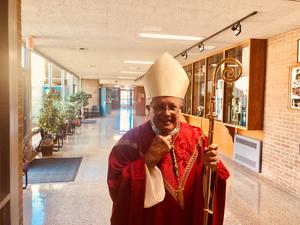 “You have something to give that only you can give,” The Most Rev. Bishop Michael R. Cote told the Xavier student body at the Opening of School Mass on Tuesday morning. “To what is God calling you … by name ... to do in life?”

The Xavier freshmen, those receiving awards and the peer ministers were gathered in the gym for the Mass. All other students viewed the Mass live from their classrooms.

Bishop Cote reminded us it didn’t matter where we were for God is omnipresent. God is everywhere.

He also reminded the students that the start of the new school year is a time to come with “expectant faith. We come with open minds and hearts to learn and grow. We are an ordinary people chosen by God to do extraordinary things. Because of God’s grace all things are possible for us.”

He was given a customary gift. This time it was a Xavier windbreaker. And then he gave his customary gift to the Xavier students: a day off, the Bishop’s Holiday, to be used at the discretion of the administration.

The Mass can be viewed here.

The awards given out at the Opening of School Mass:

Aidan Higgins ’22 has been named a National Merit semifinalist. Each year, approximately 1.5 million students entered the National Merit Scholarship program by taking the PSAT in their junior year.  Of those students, approximately 16,000 are being recognized nationally as semifinalists for their outstanding performance. Higgins is now eligible to become a finalist. The list of commended students has yet to be released.

These are awarded to those students who earned the highest un-weighted grade point average in their class in the 2020-2021 school year. This year’s recipients are:

From the Class of 2022: Aidan Higgins and Dylan Levesque

From the Class of 2023: Dominic Cusano

Each year the BROTHER CELESTINE MEDAL is awarded to students who, upon the completion of the past academic year, have an overall final average of A with no final average grade less than an A- in their major subjects. This prestigious award, which a student can receive only once during his four years at Xavier, is the highest academic tribute that the school bestows. The award is named after Brother Celestine Killigrew who taught history and Religion, coached the freshmen soccer team, and ran the bookstore at Xavier in the early 1960’s. Brother Celestine died at the age of 25 as a result of injuries sustained in an automobile accident. The Brother Celestine Award was created to honor this beloved teacher’s memory.

The recipients of the 2020-2021 Brother Celestine Award are:

The College Board, which administers the PSAT and SAT among its activities, recognizes academic excellence through its National Recognition Programs. Students must meet rigorous GPA, AP, and PSAT academic standards to receive this honor. The recipients are Duane James and Selorm Dogbey.

Each year applicants to Xavier are required to take the High School Placement Test – a national standardized test used by many private schools across the country. One measure of achievement on the test is a national percentile rating. Xavier honors those students who score in the 95-99 national percentile as Ryken Scholars. The Ryken program is named in honor of the founder of the Xaverian Brothers, Theodore James Ryken. The work that Ryken began in Belgium 180 years ago is carried on today by the Xaverian Brothers and their lay colleagues throughout the world

THE BR. DAVID EDDY ACADEMIC SCHOLARSHIP honors the memory of Br. David Eddy, a member of the Xaverian Brothers for 43 years and a member of the Xavier High School faculty from 1976 to 1985.  The scholarship is awarded to those who scored in the 96th percentile on the entrance exam. The recipient is Aedan Quan.

THE THOMAS PIERCE HONORS MEMORIAL SCHOLARSHIP was established in honor of Mr. Pierce, a science teacher at Xavier and in Kenya from 1964 through 2007 who, during his tenure at Xavier, served as science department chairperson. The scholarship is awarded to those who scored in the 98th percentile on the entrance exam.  The recipients are Petros Paul, Ethan Pelletier, Jaycek Simko and Oliver Snow.

THE BISHOP VINCENT J. HINES ACADEMIC SCHOLARSHIP honors the memory of the late Most Rev. Vincent J. Hines, second Bishop of Norwich, who along with the Congregation of the Brothers of St. Francis Xavier, founded Xavier High School in 1963. The scholarship is awarded to those who scored in the 99th percentile on the entrance exam. The recipients are Zander Bos, Owen Jones, Charles Lechowicz, Joseph Lechowicz, and Joshua Raj.

THE BROTHER ROBERT SULLIVAN ACADEMIC SCHOLARSHIP honors the memory of Br. Robert Sullivan, the first principal of Xavier High School and is awarded to those who scored in the 99th percentile and achieved the highest raw score on the entrance exam.  The recipient this year is Samuel Marsh.

These are granted to students entering the freshman year who, in the course of their middle school years, have consistently demonstrated the qualities of scholarship, leadership, and service that we will expect of them here at Xavier. The recipients are Nicholas DiBella, Carter Dominello, Thomas Frost, Andrew Licurse, Griffin Manske, Quinn Martin, Connor Purcell and Ryan Walsh.