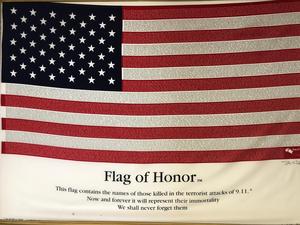 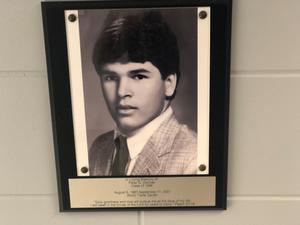 Peter Gelinas, Class of 1986, Was Killed In Terrorist Attacks 20 Years Ago

None of our current students were born on Sept. 11, 2001, when the U.S. experienced terrorist attacks on its soil with about 3,000 people dying. But that did not stop them, does not stop us, from always remembering that day.

The Xavier school day always opens with prayer and on Friday morning there was a special one by the Peer Ministers. Principal Brendan Donohue reminded the students of the 9/11 memorial flag that hangs on the wall outside of the Brothers Residence, and the photo of 1986 graduate Peter Gelinas that hangs on a wall across from the chapel. Gelinas was killed in the World Trade Center attacks.

Part of the prayer read Friday morning: “Heavenly Father, Creator of all people and all nations, it is with deep sorrow that we remember the tragic events that occurred on September 11, 2001.  We lift to you in prayer all those who died at the World Trade Center, at the Pentagon, and on United Airlines Flight 93.  We entrust them to your care and ask you to bring them into your loving presence in heaven, where they will find peace and rest in your kingdom.  Continue to bring healing and comfort to their families and friends.  Console them in their grief, especially on this difficult day of remembrance.  Fill them with hope in your promise of eternal life for those who do your will.  In a special way, we pray for the repose of the soul of Peter Gelinas, Xavier alum from the Class of 1986, who died in the attacks.”

After school in the chapel a rosary was to be recited to commemorate the 20th anniversary of 9/11, which is Saturday.

Gelinas worked in New York City for Cantor Fitzgerald. He played football all four years at Xavier and was a captain in 1985. At the football banquet in his senior year, Gelinas won the Larry McHugh Senior Award. He was active at Xavier in other ways: Homeroom rep as a freshman and sophomore, baseball as a freshman, junior volunteer and junior retreat in his third year here; and XLI Institute as a senior.

The end of the prayer Friday morning at Xavier: “Allow us to work toward peace rather than war; justice rather than revenge; and forgiveness rather than hatred.  Give our leaders the wisdom to keep us secure while striving for lasting peace.  Guide our hearts to seek you even in life’s tragedies.  Bring an end to terrorism and grant us peace in our hearts, our homes, our communities, our nation, and our world.”