Xavier Opens Its Doors At Open House ... And The Inside Is Bursting With Energy 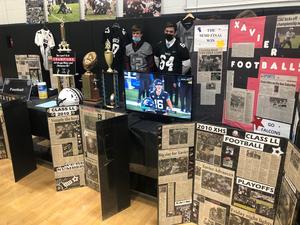 Sunday A Day To Explore The Campus

Members of the jazz band played, there was a preview of the upcoming Mercy-Xavier theatre production, the robotics team was demonstrating its robots, Home & School Association parents welcomed visitors with goody bags in the Dining Hall, the Falcon mascot was roaming the hallways, there were 3D printing demonstrations in the Innovation Lab, and that wasn’t the half of it.

Teachers were in classrooms, clubs and athletic teams were represented in the gymnasium, and more than 150 Xavier students were on hand to give tours to families or represent their club or athletic team at the Fall Open House.

“Growing up in Connecticut I had have always heard a lot of positive things about Xavier,” said Diane Raymond of Wethersfield, whose son Adam is considering becoming a Falcon. “We had a neighbor [Matt Ryan ‘20] come to Xavier, and we want the same experience for our son that we have seen Matt go through. We watched as Matt became a man. He’s polite and kind, and he has so many positive things to say about the school.”

The Sobieskis of Portland were here visiting with their son Andrew. Their son Matt is a sophomore.

“It has been tremendous for Matt academically, and he plays soccer, and is starting to get involved with clubs,” Bill Sobieski said. “The opportunities have been tremendous and he loves the school.”

David Bottaro of Haddam was like many of the parents who came through here Sunday, sacrificing a bit of a weekend to focus on the future.

“We’re looking for options for a great college preparatory school for Jackson as he starts to look toward the next steps in life. We’re looking for a well-rounded program with lots of activities, a great education, and a camaraderie among the students,” Bottaro said.

For more information about the school, visit the general website, xavierhighschool.org, or for more on the athletic program, visit xavierfalcons.com.

There also are shadow visits that can acclimate a potential student to Xavier.