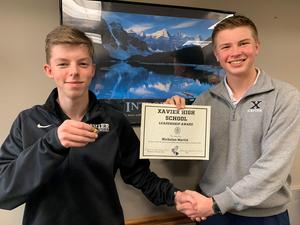 The Empower Leadership Club has chosen Nick Martin ’22 to be the December leader of the month at Xavier High School.

“As a member of the cross country team Nick always puts the team first and holds his teammates accountable,” Tristan Schemmerling ’23 said when announcing the winner. “Despite not being a captain, Nick still uses his role as a senior member to be a calm voice to help his teammates stay focused. He has always been a team leader in the sense that he puts the team ahead of himself. In school Nick is a loyal and trustworthy friend who would truly do anything to help his friends.”

Students are nominated by faculty and staff, and members of the Empower Leadership Club are not told the name of the student until after the voting has occurred.  They are only given the details provided in the nomination.

“More than anything, he is resilient and dedicated to the overall team goal – always. And his teammates know it and constantly use Nick as a guiding force,” assistant cross country coach Matt Conyers said.

Martin, at left in the photo, had just come from one of his mid-year exams when the announcement was made.

“I wasn’t expecting it,” Martin said, “but it feels good. I was caught a little off guard, and I am proud of winning.”

His style of leadership?

“Generally it is letting people take care of themselves but stepping in when needed,” Martin said. “You don’t need to micromanage people, but it’s getting people to stay focused and get what they need done.”