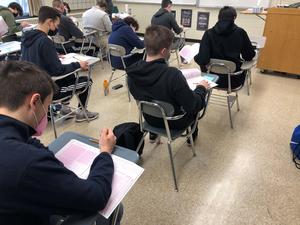 About 23 Students Participate In Pre-ACT Test

It’s Christmas break at Xavier, midyear exams are over, but that did not stop about 23 juniors from testing themselves in a different way on Monday. They were taking pre-ACT tests.

The ACT, like the SAT, is a standardized test that is used for college admissions in the United States.

“The pre-ACT is similar to the PSAT in that it exposes students to the types of questions that will be on the ACT, which they will take March 29 here at Xavier,” Director of Guidance Nick Grasso ’05 said. “It’s a pilot, experimental program where we are trying to give the students more options. Normally not many take the ACT because we have SAT administration here on Saturdays and we do the PSAT; it’s embedded into the culture.

“But the ACT is an equally valid test that colleges use across the country and some students tend to do better on the ACT than the SAT. The scoring is a little different, the content a little different. This will give students a chance to see if they do better on this and could they use that score instead of their SAT score to enhance their application. All these students will do both … they will take the SAT on March 23, but they are part of this pilot group.”