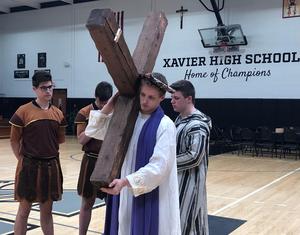 "Through The Anguish In His Eyes, I Saw Love"

Simon of Cyrene is visiting Jerusalem for the Feast of Passover. He is pressed into service by the Roman soldiers to do what he says is the unthinkable, help a man carry his cross to his execution. He says he wants no part of it but fears for his life.

“The victim’s name was Jesus,” Simon said. “And our chance meeting changed my life. Despite His agony and struggle to walk, there was a sense of peace about Him. Through the anguish in His eyes, I saw love. Some said He was falsely accused, yet He accepted His fate with a sense of surrender and abandonment. For some unexplained reason He seemed resolved to make His way to the top of the hill where crucifixion awaited. He didn’t respond to the insults of the crowd other than to speak softly under His breath words that sounded like prayers for those who persecuted Him. I didn’t want to take part in his execution, but the more I looked at him, the more I wanted to ease his pain and help Him carry His cross.”

Why? “I have never seen such faith in the midst of tragedy,” is Simon’s answer.

This is just one of the scenes played out in the gym during the Lenten Prayer Service on Friday afternoon. About 25 students participated in seven scenes, from Palm Sunday to the body of Jesus being taken down from the cross and laid in the tomb as we await Easter Sunday.

Along the way there are many meaningful questions, among them these. Have you ever put a price on your integrity as Judas does when he turns on Jesus?  Would you stay with Jesus if the crowd turns on him and even if your friends do not, as Apostle James wonders about himself. Have you done what you know is wrong just to go along with the crowd, as Pontius Pilate does?

The service closed with Principal Brendan Donohue reminding the students that “Holy Week is a time to reflect on the mercy God has shown all of us and the mercy we can show others.”  He reminded us it is a time to think of the poor, the needy, the neglected, the people of Ukraine.