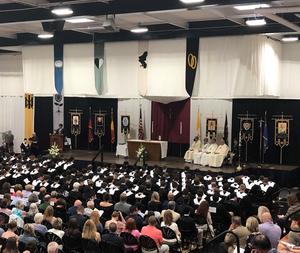 It is two days of festivities that seemed so far away four years ago. Now they’re here, the Baccalaureate Mass on Friday and graduation on Saturday.

At Friday’s graduation liturgy, the Rev. David Choquette ’90 told the Class of 2022 that while they are headed out to unchartered territory, one thing remains certain: God will be with them as he has been during their time at Xavier.

On Saturday at 9 a.m.,182 members of the 56th graduating class will become Xavier High School alums.

Friday’s Baccalaureate Mass and Ceremonies can be viewed HERE.

This award is given annually to a graduating senior in the College Prep or Accelerated programs who has embraced the full Xavier experience, consistently worked to his potential in and out of the classroom, steadily improved his GPA over four years and exemplified what we demand of each of our students – to simply do his best day in and day out.

In the classroom, Misenti has always worked hard and maintained excellent grades throughout his four years, earning his way into five different honor societies. He was an XLI participant and served as a valued Big Falcon for the freshmen. He has volunteered his time at his local church delivering food to those in need and serving as a summer camp counselor. His guidance counselor said of him: “He is one of those students who simply rolls up his sleeves and takes care of business, ensuring that he diligently follows through with his commitments.”

It came as no surprise to anyone that Misenti was named captain of the soccer team and helped lead the team to the SCC Championship and to the Class L state semifinals. He is the son of Jeffrey and Lynn of Middletown and will continue his stellar career as a Bryant University Bulldog.

About 1% of those 1.5 million students are recognized nationally as Finalists for their outstanding performance. One member of the class of 2022 has been named a National Merit Finalist: Aidan Higgins.

Each year the College Board recognizes students who perform exceptionally well on multiple college-level Advanced Placement exams. While the results of this year’s AP exams are not yet known, at the conclusion of their junior year, members of the Class of 2022 were recognized by College Board for their outstanding performance.

Each year a group of juniors represent Xavier at the XBSS Junior Retreat with students from the 12 other Xaverian schools. These are the Class of 2022 members who were participants as juniors in the 2020-2021 school year. They also are being thanked for living out the XBSS mission here at Xavier over the past four years: Nicholas Cusano, Selorm Dogbey, Brady Higgins, Joseph Lane, Colin Loria, Joseph O’Brien, John Roy, Sheel Vallam. Loria was the senior leader for Xavier at the retreat this school year.

The medal is awarded each year to students who, upon the completion of the academic year, have an overall final average of A with no final average grade less than an A- in their major subjects.  This prestigious award, which a student can be given only once during his four years at Xavier, is the highest academic tribute that the school bestows.  The award is named after Brother Celestine Killigrew who taught history and Religion at Xavier in the early 1960’s and died as a result of injuries sustained in an automobile accident.

This year two more members of Class of 2022 are being recognized for having earned this honor in their senior year: Jacob Kirejczyk, Benjamin Pitruzzello

They did not miss a day of school in 4 years: Jamie Ayepah, Dillon Luke, Liam Sheeley

APPOINTED TO A U.S. SERVICE ACADEMY

Many of our graduates have received special recognition from Xavier or from national, state, and local organizations.

Kevin Gilhuly was recognized by the CONNECTICUT SOCIETY OF CERTIFIED PUBLIC ACCOUNTANTS.

Nathaniel Lowry earned a CERTIFICATE OF HONOR for his performance on the Level 4 NATIONAL FRENCH EXAM.

Liam Sheeley received the CONNECTICUT ASSOCIATION OF SCHOOLS HIGH SCHOOL FINE ARTS AWARD and earned a CERTIFICATE OF HONOR for his performance on the LEVEL 4 NATIONAL SPANISH EXAM.