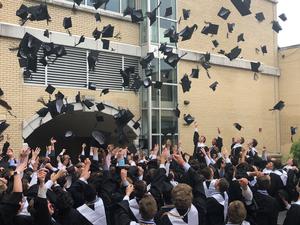 Xavier graduated 182 on Saturday at its 56th commencement exercises with the Most Reverend Michael R. Cote, Bishop of The Diocese of Norwich, among those addressing the students. He challenged them to go out and do good in this world, during these unsettling times, and was certain they would.

The graduation can be viewed HERE.

A summary of the awards and recognition.

Higgins is the son of Matthew and Patricia of Rockfall.  As one would expect, Aidan’s academic credentials as the No. 1-ranked senior are unparalleled.   He finished his academic career at Xavier with an overall 4.32 GPA and with more A-pluses on his transcript than any other senior.

He also was in the Philosophy Club, the Ryken Service Society, and served as Editor-in-Chief of The Kestrel, the school newspaper.  One true passion of Aidan’s is the environment, and as such, in his sophomore year he initiated Xavier’s chapter of the Surfrider Club.  The Surfrider Foundation is a national organization that fights for coastal preservation, clean water, and plastic -free marine environments.  Over the past two years Aidan has coordinated numerous shoreline pickups that have led to hundreds of pounds of trash being removed.

Perhaps this faculty member summed it up best about Higgins: “Aidan is simply the most remarkable student I have ever taught.”

Aidan will bring all his talents and convictions to the campus of Harvard University in the fall where he will major in English Literature.

O’Connor is the son of Barbra and Dan of Cromwell.  Contributing to this outstanding distinction:  Brother Celestine Award winner, the highest academic honor Xavier can bestow; National Merit Commended Student; membership in the National Honor Society as well as the English, French, Science, Social Studies, and Math Honor Societies; the latter of which he was President; Distinguished Scholar recognition, four-year recipient of the Thomas Aiello Scholarship, Rochester Institute of Technology Award, and several other scholarship and academic awards  Outside of the classroom, Matt participated in the Empower Leadership Program, the Math Team, and the Robotics Team.

Wrote one faculty member:  “Matt is the captain of the Robotics Team. To be the leader of this club with over 50 members and 10 adult mentor involves the ability to coordinate activities, plan effectively, and communicate well.  Matthew has all these skills.”

In the fall Matt will be traveling up Route 84 to Storrs where he will be attending UConn as the recipient of the STEM Presidential Scholarship to study Actuarial Science.

The Falcon Achievement Award recognizes a senior who has represented the very best that athletics stand for at Xavier. Chosen upon the recommendation of the faculty and staff, the recipient is a young man who embodies those qualities of loyalty, commitment, sportsmanship and hard work, which characterize our fine scholar-athletes.

Kron has had a truly remarkable Xavier career, not only in the athletic arena, but in the classroom, and throughout the entire Xavier community. His presence has been felt in all aspects of the school by both his peers and the faculty and staff from the day he walked through the doors. He has a cumulative GPA approaching a 4.00, entrance into six different honor societies, and is a recipient of the Brother Celestine Medal.

“Around the school, he is never far from the center of activity, not because he seeks attention, but because he seeks to serve,” Principal Brendan Donohue read to the crowd as he was introducing Kron as the recipient. “Over the years, his contributions to the student activities council have been numerous. An XLI participant, he has been an excellent Big Falcon and roll model for many other students and athletes.”

One of his coaches said of him: “He is everything that we ask for in a student athlete. He is humble, focused, and intense. He leads by example with his performance on the field as well as his success in the classroom. He is going to be missed.”

Kron is the son of Ken and Caroline of Hebron. He is headed to UConn as a Division I scholarship baseball player.

The Xavier Loyalty and Service Award, the most prestigious award that the school confers, is presented to a member of the graduating class who is chosen upon the recommendation of the faculty and staff. Loyalty and service are qualities that Xavier High School strives to teach all its young men and they are crucial to the fulfillment of the school’s mission. The choice is based on the consistency and quality of the student’s service to the Xavier community and the passion and perseverance he has displayed in his commitment to all aspects that make up the experience of a Xavier High School student.

Wollen is six different honor societies and a winner of the Brother Celestine Medal. One teacher commented, “He has an easy, inquisitive, and extraordinarily generous way about him, which allows him to be deeply engaged with both the work we were studying and with the teacher. He is a natural leader in the classroom.”

Outside, the classroom is seemingly everywhere, lending a hand at events, helping to organize student activities, offering his assistance at school-wide events. At XLI, he stood out as a leader among leaders and set the tone early for a tremendous senior year. As a peer minister, he shared his keen sense of selfless service to others and is an inspiration to the entire community. A member of the Empower Leadership Club and the Ryken Service Society, he humbly led his peers in multiple projects designed to improve the Xavier community and address the needs of those in the Middletown area.

His guidance counselor said: “He cares more about others than he cares for himself.”

Wollen and his family raised $15,000 for charity during the pandemic by making and selling “thank you” signs that recognized essential workers. He built a stand and sold firewood, which in part benefited the Rocky Hill Veterans Home. He designed and raised funds to purchase T-shirts thanking the local fire and police departments.

Wollen was a four-year member of the swim team and holds school records in the 100 backstroke, the 200 medley relay, and the 400 free relay.

The son of Mark and Julie of Wallingford, Mitchell will attend the United States Military Academy at West Point.

Xavier presented a special award to the 19 alumni fathers, grandfathers, and guardians of today’s graduating seniors.  The younger graduate received a ribbon on which hangs a medal of the Xavier seal.  He then placed the medal on the shoulders of his father. Engraved on the back of the medal are the names of both father and son as well as their years of graduation.

Brother Thomas Ryan, a native of the Bronx, joined the Xaverian Brothers upon graduating from Cardinal Hayes High School in 1966. Earning his BA in American Studies from Catholic University and his MA in American History from Assumption College, he arrived at Xavier in 1993 for the first of two stints, after serving 22 years in other Xaverian schools. After a four-year reprieve as head of the Brothers Retirement home in Danvers, MA, he returned to Xavier in 2008.

Brother Ryan has been honored with Xavier’s Ryken Award and the St. Francis Xavier Award and is highly respected and revered by all in the Xavier community. But what truly sets Brother apart is his deep and genuine concern for every life that he touches. He has been known to walk the halls at 5 a.m. on a final exam day in June and open every window in every classroom to allow the morning air to cool down the building. Generations of students have newspaper clips that Brother thoughtfully set aside for each of them. Dozens of Xavier families have been consoled by Brother Ryan on the loss of a loved one. Alumni from several decades still receive cards and letters from him when they reach a personal or profession milestone.

Mr. Daniel Cizauakas has served as Xavier’s Business Manager since he arrived on Randolph Road in 1997. He is celebrating his 25th years here. Before coming to Xavier Mr. Cizauskas served as a Petty Officer on the aircraft carrier USS John F. Kennedy.  He oversaw a squadron of A-6 Intruders during Operation Desert Storm which led to a letter of commendation.  He attended the University of Connecticut, graduating in 1995 with a degree in accounting.  He went on to earn an MBA before coming to Xavier as our business manager.

His son Nate is a 2015 Xavier grad and now a registered nurse, and his daughter Nicole, a 2018 Mercy grad, will be graduating from St. Andrew’s University in Scotland in a few weeks.