Expanding Their Horizons After The School Year 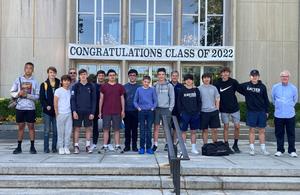 The education of a young man need not stop in the summer.

And it is not for many Xavier students.

Sam Enes ‘23 and Gavin Dow ’23 were selected to participate in the United States Naval Academy Summer Seminar, a six-day program that gives high school students a taste of what it’s like to be a midshipman at the U.S. Naval Academy. They recently returned from that experience.

The service trip to Camden, N.J., brings students to the Romero Center, whose ministries serve the poor and vulnerable members of the Camden community. The Romero Center works with churches, nonprofits and volunteers to provide students such as those at Xavier the possibility of ministering in various ways.

At the Naval Academy Summer Program students take classes in a variety of subjects, including engineering, navigation, and leadership, according to the website. There’s also a little competition.

“All participants were selected through an application process, which counted as a preliminary application to the Naval Academy,” Enes said. “We were split up into companies that competed against each other for the company title. Gavin was a part of Bravo Company, and I was a part of Delta Company. During the final days, we had the opportunity to participate in sea trials, where companies competed against each other in numerous activities. We went through training that included push-ups on the beach side, a mile-and-a-half obstacle course that was timer for each candidate.”

Enes and Dow each are interested in attending the Naval Academy.

“The experience was incredible, to say the least,” Enes said. “For a while, I have dreamed about going to the Naval Academy, partly due to my father’s previous service in the Navy as a part of the Seabees unit. I had never experienced what the military lifestyle was really like until I got to the academy, and to be honest that’s the biggest thing I took away from this experience. I found out from living and experiencing the Naval Academy for a week that this is truly where I belong and the lifestyle that would help better me as a student, athlete, and leader. I will be attending XLI at the end of the summer, and I hope to take the leadership qualities I obtained from this experience and use them during XLI to further the retreat.”