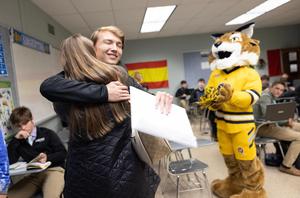 Tim Pata '23 Becomes One Of The First Two Students Accepted at Quinnipiac University
Tim Pata '23 figured he was going to hear back from Quinnipiac University soon about his early decision application.
He just didn't expect them to make a visit to Randolph Road.
Last Monday, Pata ’23 learned he was one of the first two students admitted to the Class of 2027 at Quinnipiac University when his class was interrupted by the school's mascot Boomer the Bobcat.
In celebration of the news, Quinnipiac’s Chief Experience Officer Tom Ellet stopped by Xavier with a few students and the Mascot to tell Pata he had been accepted.
After making their way through the halls, Boomer and the crew dropped in Pata class with Mr. Cunningham to deliver the news and paperwork.
Pata, who was sitting quietly in the front row of the class, knew something was up when Ellet came through the door and asked him if he knew any of the people that had just entered the classroom. A few seconds later, Ellet handed Pata his acceptance letter.
On top of the Quinnipiac crew, Pata parents joined him for the announcement. After the scene in the classroom, Pata joined his family outside the school for photos.