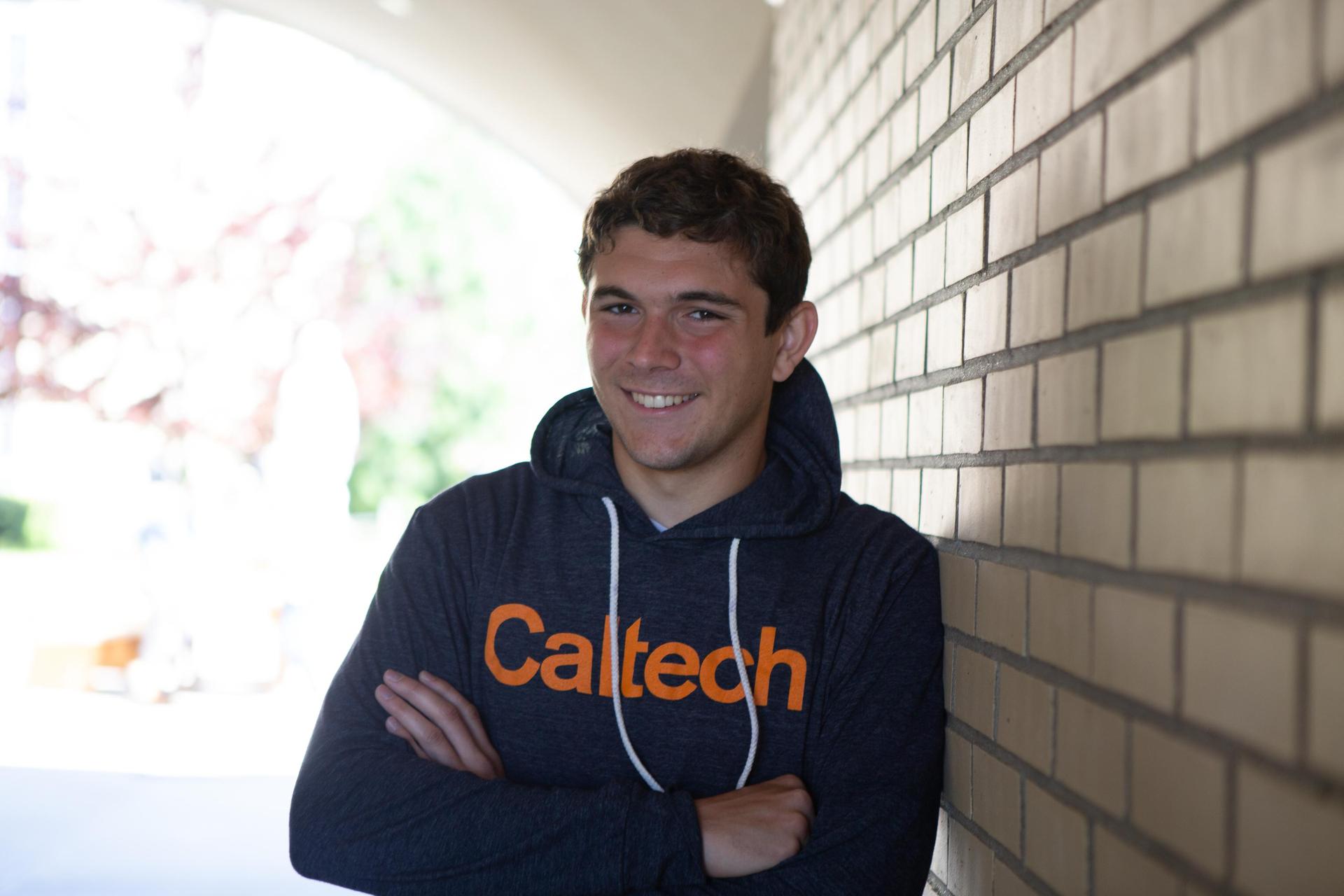 Every Xavier student has his own story.
Whether the goal is to attend one of the best colleges in the country or to qualify for the Olympics, our community is there for our students. And we love telling their stories. But how do they get from Point A to Point B?
At Xavier, we help them: Prepare, Grow and Lead.
What happens after they leave? Well. That's up to them. But we know they're ready for the next step. And no matter what, we will always be here at Xavier ready to support them, and cheer them on.
Below we look at three different students.
One who left Xavier prepared. Another who grew up at Xavier. And finally a student who is ready to lead wherever he goes.
We hope you enjoy their stories. These are the stories of Mark Grasso '20 (Prepare), Davon Colon '20 (Grow) and Ethan Kerr '20 (Lead). 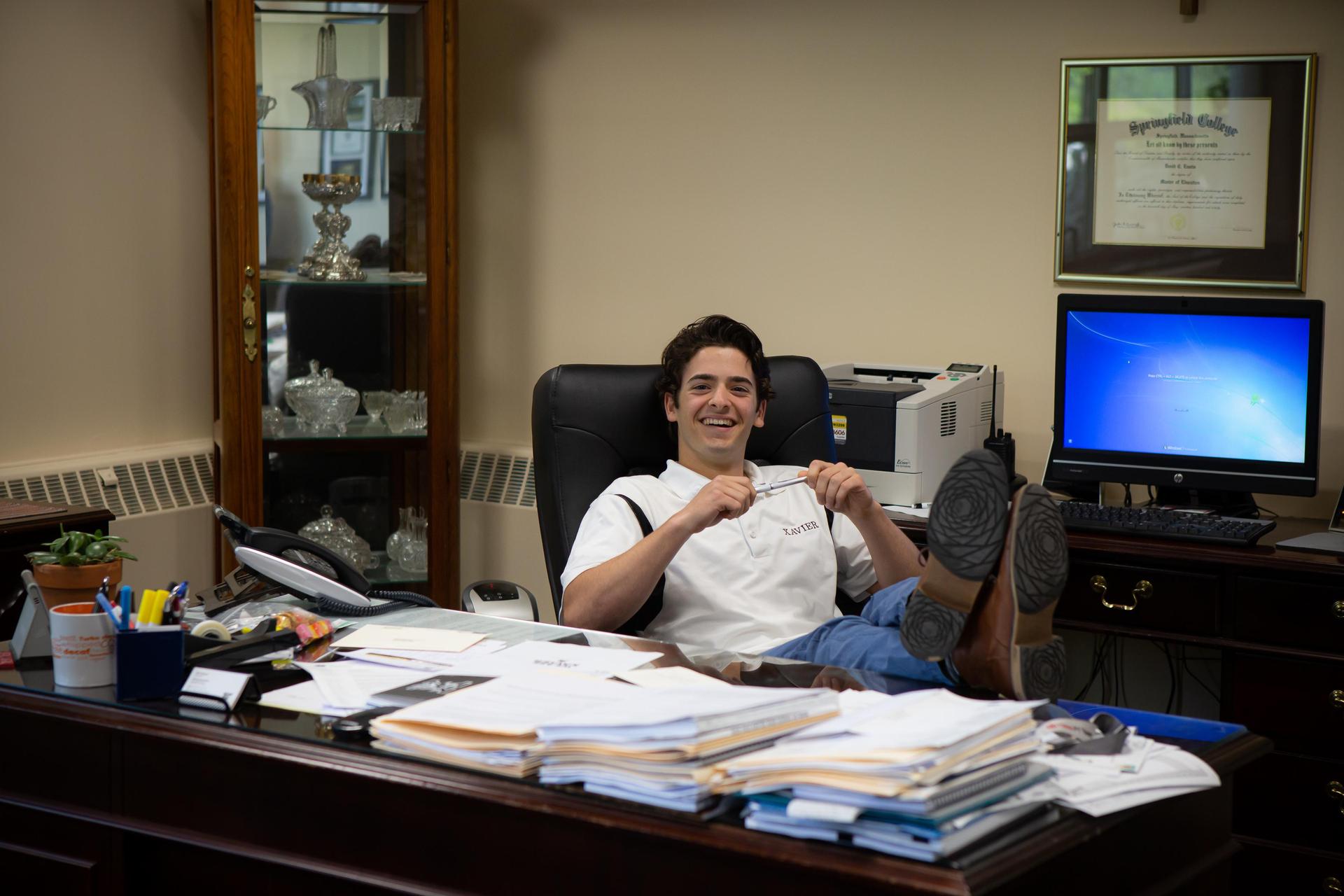 When it came time to decide what high school he was going to attend, Mark Grasso ’20 had plenty of choices.

The list went on. But before eighth grade, Grasso had made up his mind.

He was going to the place with all the stories.

“My brother [Brian] went to Choate and he has a lot of stories, but these stories at Xavier are just classic,” Grasso said. “I didn’t have any hesitation. I knew what Xavier had to offer from the beginning.”

As the youngest of five boys, four of whom went to Xavier, Grasso spent his childhood hearing about the school.

The names of teachers. The important events. The big moments. They were all lodged in his memory.

Through elementary and middle school, Grasso had sat at the dinner table and listened like any younger brother, absorbing every little detail. And when it was his turn, he wanted to give Xavier a try, too.

“Seeing them grow up, I saw them mature [at Xavier],” Grasso said. “This place is unlike any other place. The discipline you get taught here you wouldn’t get at any other school. I’m very glad I went here. I love Xavier. It is my home.”

At Xavier, the youngest Grasso carved his own niche through his easy-going and kind demeanor. Still, he admits it was tough at first.

“It is not easy having four older brothers that are really successful – you feel like you have a lot to live up to,” Grasso said. “But it is also motivating. I want to be as successful as them one day.”

“I would do anything for my brothers,” Grasso said. “Honestly, I wouldn’t want to be anyone else. Growing up with four brothers and two loving parents [Anthony and Celeste], you can’t ask for much more. There’s a lot of love growing up in the Grasso household.”

Despite the age difference – Mark is separated by 12 years from his oldest brother and five years from the second youngest – the connection has always been tight.

“That’s the way my parents raised us,” Grasso said. “We’ve always been really close. We’re all very similar. We all tell the same jokes and feed off of them. People always say we’re the same person”

Grasso might have followed his brothers to Xavier. But he’s far from a follower, especially at Xavier.

With his own special brand of confidence and charisma, he left his own mark on the Xavier community as a SAC member (student body vice president), a teammate (baseball) and a peer minister.

“He never judges anyone and what makes him so special is how he can connect to every person in our school community on some level,” Dean of Students Nicholas Cerreta said. “People always feel at ease and comfortable around Mark because of his genuine caring personality.”

That compassion for others is obvious when Grasso talks about Oakley Debbs, the son of one of his brothers’ friends. Oakley died when was 11 of a fatal allergic reaction to nuts was.

Grasso has tried to raise awareness for the dangers of allergies and other struggles through an Instagram account he created, where he dances and wears red sneakers in memory of Debbs, who used to have his own pair.

Grasso, who was well known at Xavier as someone who loves to dance when given the chance, wanted to raise awareness, but also do something that can bring a little joy to the Debbs family.

“The theme is ‘Red Sneakers for Oakley,’ so I wear red sneakers in all my dance videos,” Grasso said. “His favorite color was red.”

Grasso, who learned dancing from his brother Brian at age five five, tries to be true to who he is.

“I just try to have fun and spread the energy I have,” Grasso said.

Grasso credits not only his brothers and his parents for instilling in him the important values he tries to live by now, but also Xavier.

At the Xaverian Brothers Sponsored School Junior Retreat last year, Grasso had his eyes opened to what it means to be part of the Xaverian mission.

“It strengthened my faith and I became a better person because of it,” Grasso said. “I feel like it changed me as a person.”

Grasso said he had a tough time leaving the others students that he meet on the retreat because he had formed such a strong bond. He called it one of the best experiences of his life.

“I want that love I received at the retreat to be felt at Xavier,” Grasso said. “All the stuff I learned at the retreat, I want us to emulate that as a community. I want students to do their best to understand what the Brothers mean here and what the mission is. There’s a lot you can do at Xavier to strengthen your faith.”

During the Xavier Virtual Graduation this past year, Grasso received the Loyalty & Service Award, the highest distinction that any graduating senior can receive at Graduation.

“When my name was called for the award, I could not hold back the tears,” Mark Grasso said. “That moment I shared with my family in our home watching the graduation, that is, and will always be, one of the most special moments of my life.

“With everything that happened because of the pandemic, emotions were high, but I tried to hold back the tears throughout quarantine. Well, for everyone in that room, the emotions all came out at once when my name was called for the Loyalty & Service Award. I am so honored and grateful to have won such a beautiful award.” 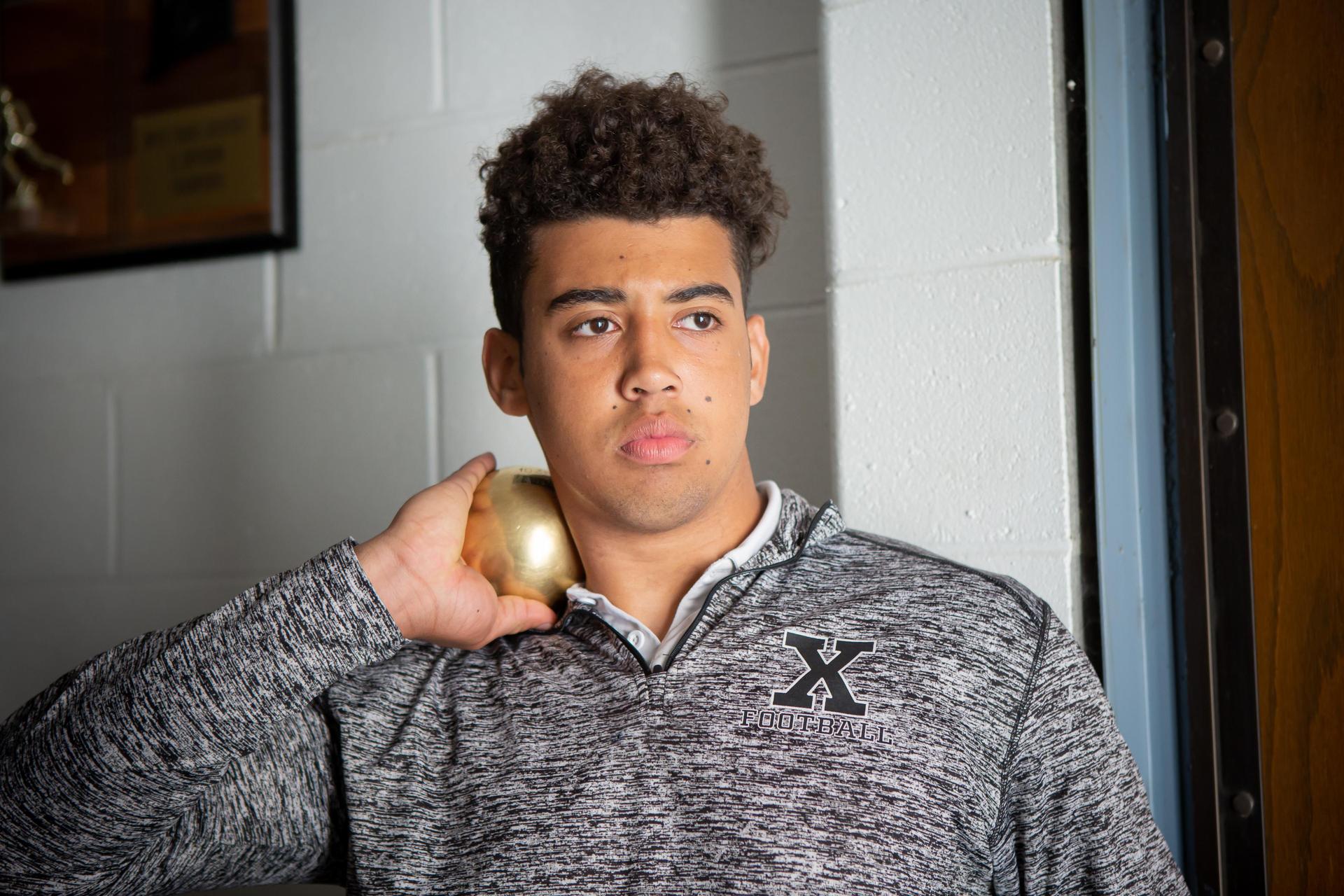 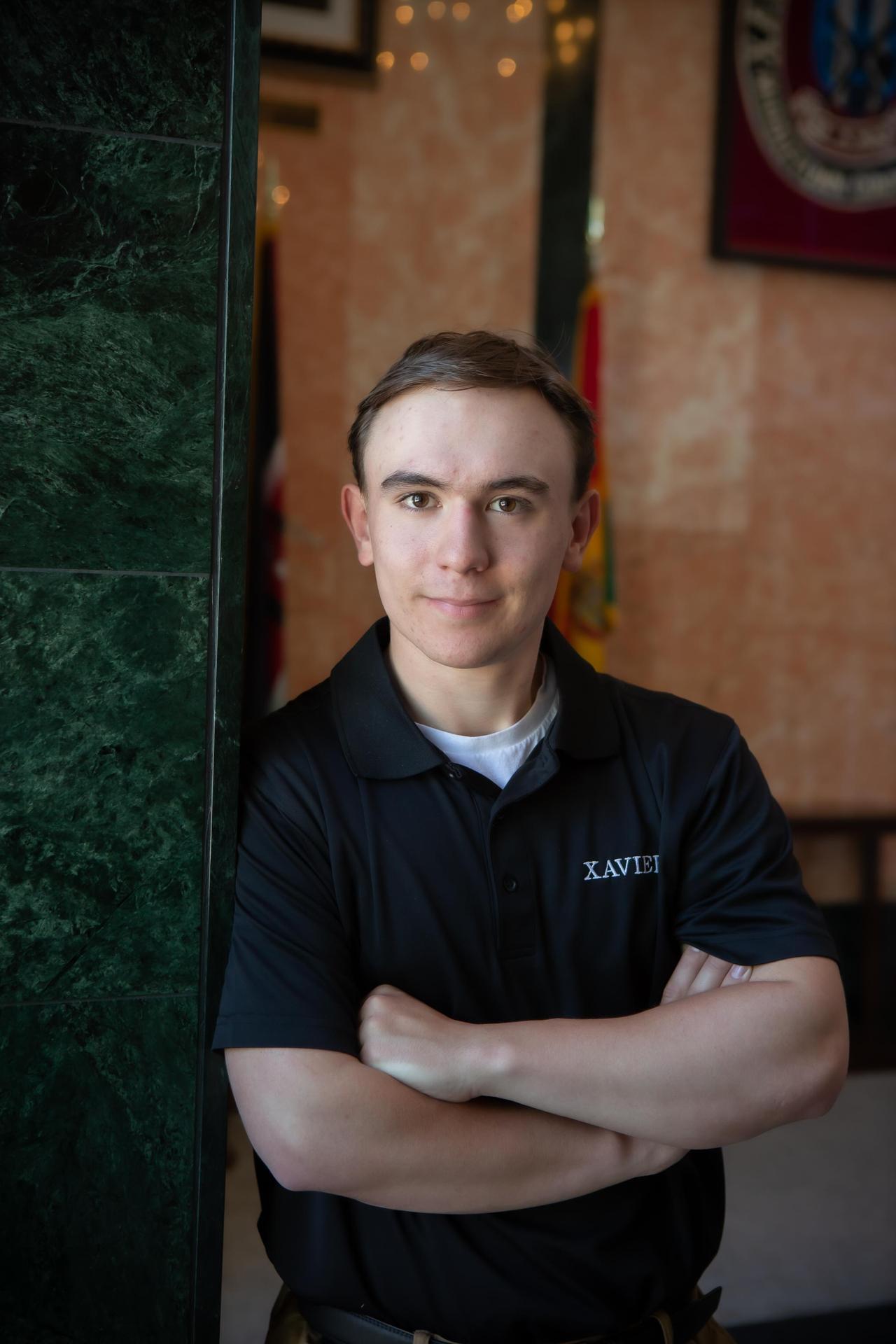 When Ethan Kerr ‘20 thinks about the time he asked Xavier religion teacher James Tyrol and Xavier Dean of Students Nick Cerreta ’01 if he could paint a cardboard box black and keep it just inside the doors of the front lobby, he laughs.
“They probably thought I was crazy for wanting to bring in a box,” Kerr said.
He wasn’t. He was just doing what he has always done: help.
At Xavier, that black box, which Kerr painted himself as a freshman, has been used to collect any canned good or non-perishable food item that is brought in for the Ryken Service Society Canned Food Drive.
“[Kerr] has always known what the right thing to do is,” Cerreta said. “He has more integrity than most people I have ever met in my life.”
Kerr, who grew up on a farm in East Haddam, always understood the mission of Xavier.
From the moment he decided to come to the school, he embraced what it means to be a party of the community and tried to give back through acts of service, both big and small. But for those that have gotten to know him and seen him at work, that’s not surprising.
Before coming to Xavier, Kerr was already living the mission.
“He has a quiet demeanor but understands more than most kids his age the true qualities of a leader,” Cerreta said. “He is humble. He is compassionate. He is loyal. He is responsible. He is loving. And he is never afraid to do the right thing.”
As a middle school student, his sense of right and wrong was already on display.
Take that familiar black box at Xavier.
Kerr attended three different middle schools (St. John’s in Middletown, which closed, St. John Paul II in Middletown and Our Lady of Mercy in Madison), but at each one he made sure that the box was also there to collect various goods for local food pantries.
“It was normal for me to bring something in or keep doing it,” Kerr said. “It wasn’t anything special or different. It is a visual reminder that you should give.”
When he’s asked why he did it, or what motivated him, Kerr shrugs.
“We all have a duty to do stuff. Somebody needs help, why not?” Kerr said.
Growing up on a farm with chickens and goats has a way of sharpening your work ethic and your principles (he jokes that if you live in East Haddam you have to have some interest in the outdoors already and that the goats were always the worst to deal with). But Kerr also credits the schooling he has gotten at four different catholic schools.
Despite not being Catholic, he has taken to the teachings he has studied.
“You can always push yourself the extra mile when you have to. There’s always more you can do,” Kerr said. “You do what you have to do to reach a greater goal. You just try and help out as many people as you can.”
At Xavier, he didn't let much get in his way of doing what he can to help.
He was a member of the Ryken Service Society and a peer minister. He was part of the photography club and Empower Leadership. He helped with the Yearbook. He was a Big Falcon. And if his plate wasn’t full enough, he was a tri-captain of the Crew team.
“Ethan goes above and beyond what is expected of him as a leader,” Cerreta said.
As well as being an active member of our community, Kerr is a boy scout and a sea scout.
He recently finished his Eagle Scout project (he put Adirondack chairs at lookouts all over East Haddam to encourage people to take some time outside to regroup) and he spends his time on the water in New London with the sea scouts
“It has definitely taught me to step up and take an active role in leadership,” Kerr said.
With the sea scouts, he is the boatswain, which he described as being the captain of a team or the senior patrol leader in boy scouts.
For Kerr, it is another opportunity to step up and help out.
He doesn’t see it as a chance to build his resume.
Just an opportunity he should take.
“I always feel there’s more I can do,” Kerr said. “I’m never completely satisfied with just doing what I’ve done.”