Artie Kohs was the first teacher/coach hired at Xavier and also was the first athletic director. He was given a budget of $100,000 by Bro. Robert Sullivan, the school's first Principal, and asked to start an athletic program. Kohs was given much latitude in all decisions but of course would run things by his boss. They would develop a deep respect for each other and a lasting friendship. 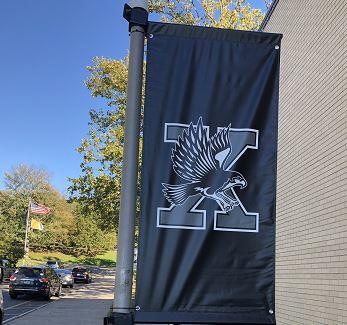 So Kohs had to figure out the school’s nickname and colors among many other things before the school's opening in 1963.

Team nickname: He chose the Falcons as the mascot because of the Air Force Falcons and the fact he did not know of any other state high school team with that nickname. The Falcon is powerful, fast and majestic. That nickname also spurred the name of the school newspaper, the Kestrel.

Team colors: He chose black and white because he remembered how good they looked on Providence College players. And that color combination has stood the test of time. That combination often is described as elegant, classy, timeless, fitting together like no other combination. And on a sports uniform there’s something about it that strikes you as businesslike, as in taking care of things on the field of play.

The Black Hole: “We’re like the Cameron Crazies [the Duke student cheering section] – only better looking,” Bell said in the 2005 yearbook.

Bell has said that he didn’t take academics seriously enough when he was here. If so, he certainly had fun. He had spirit.

Now, as assistant director of admissions as well as a religion teacher, he brings that spirit to everything he does at Xavier.