The Xavier Yearbook: Why The Don?

The name of the Xavier yearbook comes from St. Francis Xavier, patron saint of the school and of the Xaverian Brothers who staff it. Son of a Basque family of minor nobility and born in the Castle of Xavier at Navarra, Spain, Xavier was a Don, Spanish for “Lord” or “Sir,” and the prefix to every Christian name in Spanish nobility.

The first edition of the Kestrel, the school newspaper, said Don also was chosen because “it implies education. It is used to denote a head tutor or fellow at Oxford." 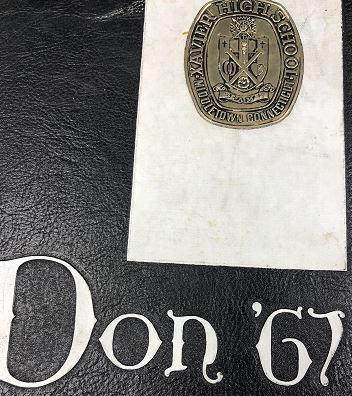 The first yearbook, in 1967, wrote the editors, "is not really a yearbook at all, for it focuses attention on all four years since the school was built and even before that. Coverage starts with Groundbreaking Day and extends through the June and July 1967 European tour of Brother Philip and his students."

The final page had the alma mater (words by Brother Robert, C.F.X., the first principal of the school, and music by Earl Ostergren):

Alma Mater, we your sons, pledge our loyalty

For your fond concern for us, thankful we shall be.

Values of what’s good and true, beautiful and right,

These you taught us faithfully. Therein is your might. 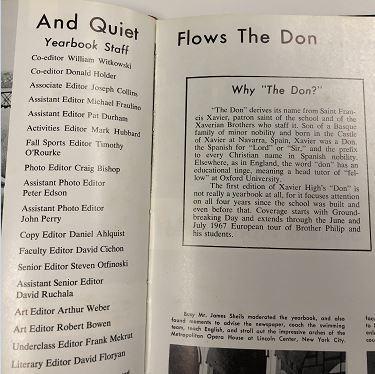 In memory we can hear your challenge ringing –

The co-editors of the first yearbook were William Witkowski and Donald Holder.

Most of the photos were taken by students or Br. Jeremiah, who seemingly always had a camera in hand. As that first yearbook notes, “The school darkroom was kept busy churning out enlargements.”

Yes, the digital world had not yet arrived.

Now, Bro. John Sullivan can be seen at various Xavier events, snapping away. He doesn’t have to worry about buying film, processing film. No darkroom needed.

Until, of course, something does not work.

"The first team invited to a statewide tournament was the 1966 soccer squad coached by Mr. [Pete] Sipples."