The mission of an institution such as Xavier High School is to look ahead, remain vibrant, stay ahead of the curve. But there also must be time to honor and celebrate the past, marking memorable milestones. As such, we look at various anniversaries.

In a Sept. 7, 1987 edition of Xavier Expressions, which was published by the Home And School Association and alumni parents, a small story appeared on the logo to be used for the 25th anniversary of the school. 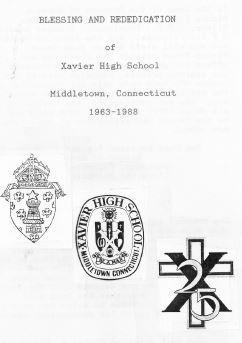 “Our logo for this year superimposes the letter ‘X,’ symbolic for Xavier, and the Greek letter “Chi,” which is the first letter of the Greek word for Christ, over a simple cross, the instrument of our redemption. The ‘X’ is black – Xavier’s color from 1963 – and the cross is white – the color of purity and glory. The blue reminds us of the Blessed Mother in the Marian Year, of education as it is the academic color of the sky – the heavens – our limits and our goals. The silver ‘25’ sets the time frame.”

The logo was created by art teacher Jayne Vitale and selected by Bro. James Kelly, alumni director Rich Feitel and the editorial staff as a “fitting symbol for 1987-88, our Silver Anniversary Year.”

A 25th birthday celebration was held Sept. 10, 1988, at Xavier with a buffet dinner and dancing.

A rededication was held Sept. 14, 1988, in which former Gov. John Dempsey spoke. Twenty-five years earlier, in 1963, the governor gave a dedication address as the school opened.

The Most. Rev. Daniel P. Reilly, Bishop of Norwich, also spoke, saying in part, “I salute my predecessor Bishop Hines for the decision he made to build these high schools. He could not have left a better legacy to the diocese.”

The Most Rev. Vincent J. Hines, former Bishop of Norwich and now retired, could not be there, writing in a letter dated Sept. 5, 1988, from St. Francis Hospital in Hartford:

“Thank you for your kind invitation to attend the rededication of Xavier High School on September 14th. September 14th will mark my 76th birthday! How wonderful it would be if I could celebrate my birthday together with you all at Xavier. Unfortunately the poor condition of my health does not permit this.

“Xavier High has been a beacon of educational light for all of Greater Middlesex County since 1963. I have often referred to Xavier High in the past as the Jewel of the Diocese.

“May this Jewel continue to sparkle in the future as it has in its glorious past.”

In parentheses after signing his name, he wrote, “Please use the enclosed check to help worthy but needy students in the payment of their tuition. This letter was dictated to and handwritten by my helpful nurse.” 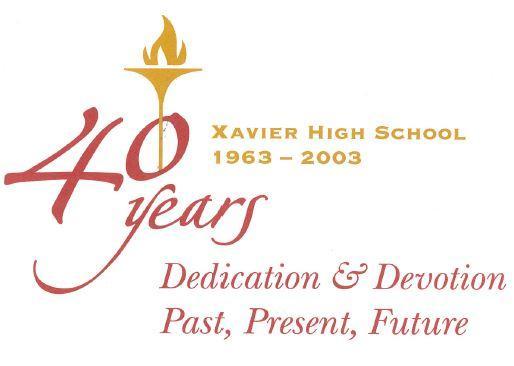 The theme was “Dedication & Devotion, Past, Present, Future.”

There was a Ruby Mass celebrated by the Most Rev. Daniel A. Hart, Bishop Emeritus of the Norwich Diocese, to kick off the 40th anniversary festivities on Oct. 5, 2003 with a reception following. Four tables formed an “X” for the buffet and there was one table on which a 40th ice carving sat.

Then on June 5, 2004 a closing Mass celebrated by the Most Rev. Michael R. Cote, Bishop of Norwich, was followed by a picnic. At the closing Mass, the flags behind the altar represented the countries in which Xaverian Brothers resided and did their ministry. They included the papal flag, which represented the Pope, our spiritual leader, followed by the United States, the Congo, United Kingdom, Belgium, Bolivia, Haiti, Kenya, Lithuania and Uganda.

The 50th anniversary gala was Sept. 14, 2013, with a performance by the Xavier jazz band, a meal that included a surf and turf main course of tenderloin of beef filet and salmon, presentations of the 2013 St. Francis Xavier Awards and the inaugural Lifetime Service Awards. 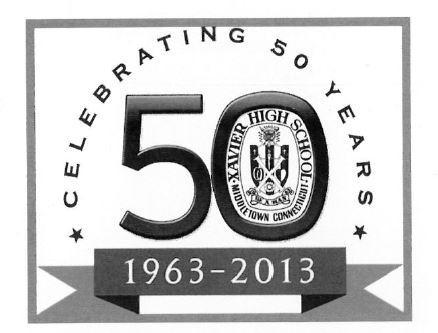 Those first two Lifetime Service Awards went to Bro. J. Robert Houlihan, C.F.X., who was in the classroom for more than 50 years, many at Xavier; and Tony Jaskot ’69, who is retiring as athletic director after the 2018-19 academic year.

The September event started in the courtyard on a day that the weather cooperated. About 300 people mingled outside while beverages and hors d’oeuvres were served and the Xavier jazz band played. The guests then went inside, many through the entrance near the chapel, where the first floor was lined with photos from the 50 years as well as student desks with the various yearbooks.

The gym served as a banquet hall and two screens showed more images from the 50 years. The crowd was welcomed by Xavier Headmaster Brother Brian Davis, who also was celebrating 50 years as a Xaverian Brother. He was surprised with a special gift. There also were remarks from the Most Rev. Michael R. Cote, Bishop of Norwich, as well as Middletown Mayor Daniel Drew, who declared the following day Xavier Anniversary Day in the City of Middletown.

The evening closed with the school prayer by Principal Brendan Donohue, who noted the prayer is said every day at the close of school at 2:26 p.m. He invited all who could to say it each day at 2:26 p.m. to do so and “know that you are in solidarity with the entire school community.”

“Xavier High has been a beacon of educational light for all of Greater Middlesex County since 1963. I have often referred to Xavier High in the past as the Jewel of the Diocese. May this Jewel continue to sparkle in the future as it has in its glorious past.”