The Xavier Publications: A Long History

Xavier has had many variations of school newspapers and other publications throughout its history.

On the front page of that four-page issue were stories about the plans for the first social between Xavier and Mercy (admission was 50 cents) and how the paper, moderated by Bro. Celestine, got its name.

The headline read, “Xciting News,” with this poem under it:

The Falcons won the football game!

A victory – how grand the feel

Can it be real?

“Such began a poem by Sr. Roberta Marie, S.M., that gave Xavier’s paper its name,” the newspaper said. “It is hoped that the 40 or so members can justify this name, XCITING NEWS.”

After two losses to open the football season, Xavier beat Woodrow Wilson, located just a few miles away in Middletown. Final score: 20-6, the first victory for Coach Larry McHugh. It also proved to be inspiration for a poem and naming the school newspaper.

The second issue was on Nov. 27, 1963, and the front page had no stories – it was reserved for a photo of John F. Kennedy with his son JFK Jr. Kennedy had been assassinated just days earlier. “In Memoriam” was above the photo, and “Our Beloved President John Fitzgerald Kennedy” was below the photo.

The January 1964 edition had a feature called “Corridor Inquirer” when a reporter drifted into the hallways to find out New Year’s resolutions by Xavier students. They ranged from “do everything I gave up last year” to “Be good in Brother Mark’s class.”

At the start of the second school year, there was the “X-tra.” Volume 1, No. 1 was on Sept. 14, 1964. Tucked into the lower left corner on the first page of a folded 8 by 10 piece of paper was an explanation of the X-TRA: “The X-tra, of which this is the first, is not intended to replace the regular school papers, the X-Citing New or the Mercy-Go-Round. It is an occasional joint venture that will appear when news, time and expenses permit.”

The X-tra wrote about various summer travels by staff and students, noting that “The most peculiar sight Father Finnerty found in Ireland and England this summer was the Beatle-type hairdos on two altar boys who served his Mass in London.” At the time he was the Xavier chaplain and a Mercy religion teacher.

An Oct. 30 edition of the X-tra shared this piece of trivia: “Did you know Bro. Robert once taught Paul Hornung chemistry down in Louisville, Kentucky?”

Bro. Robert, then principal of Xavier, taught Hornung, who went on to become a famous NFL player with the Green Bay Packers, at Saint Xavier High School.

By 1965 the newspaper was named “The Kestrel” and the first edition in October said the paper was dedicated to Bro. Celestine who died in a car accident in 1964. He was called a scholar, leader, gentleman. 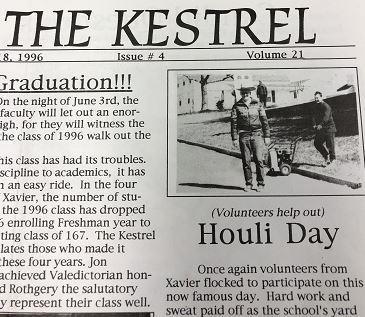 The name Kestrel came from the bird that is a member of the Falcon family. A kestrel is small, a little larger than a robin, and the newspaper said it is a “bird of character.”

In 1972, there was the Bull-etin. It might even have been considered a bit radical. An editorial in the first edition in part said:

“Well, fellow students, here it is again. Although not called the SAC-K [Student Activities Council Kestrel] anymore, it is still your school newspaper and it is now being published regularly (we hope) again. … 32 students worked on this single issue. Some wrote, some typed and some criticized, but all of them had one thing in common … a deep desire to recreate the ‘press’ that could be open to the needs of the students.

“Their dreams and desires are written in the following pages. Perhaps you won’t like some of their poetry, maybe you’ll hate a news article and the jokes may turn you off (any responsible criticism or opinion will be happily accepted and will be guaranteed print in this paper).

"But remember, in last year’s Student Council elections, the damn politicians were screaming for a newspaper. Anyone who wishes to join our staff may do so at any time. This year, there will be no excuses. This year, with your support, we will continue to print this publications and maybe even some of the politicians will work with us.”

To show the era we were in, there were album reviews of Grand Funk Railroad, the Mothers of Invention, and Emerson, Lake & Palmer, and a concert review of Sly and the Family Stone in that first edition.

The final edition that year thanked the “Xavier administration for their policy of non-intervention.”

It also recapped some highlights from the year, two of which were “the football team was undefeated” and “sports jackets came off.”

There were non-traditional publications, too, such as the Hot Sheet that appeared around the same time as the Bull-etin.

And we came across a 1969 publication called “Of.”

“Of” was billed as a place “to publish expressions which would otherwise go unpublished … this is the people’s paper, and we give it to you, the people.” One editorial spoke of “wasting the cream of our crop in Vietnam.”

The back of the issue had a “Fall Peace Action Calendar,” that included New England CNVA (Committee for Non-Violent Actions) events concerning the Vietnam War.

Various literary publications have been a part of school history, too, including the current iteration called “Sketches.” Over the years there have been “Our World,” “Enigma,” "Chronos," and “Writer’s Bloc.”

The 1967 Chronos had an introduction from editor Steven Otfinoski. In part it said: ... "Finally, let us not forget that the purpose of art and especially literature is not to comfort and reassure our minds, but to confront, challenge, and annoy them ... to force us to think ... to dare us to come alive to the word that surrounds us."

We found one of the publications from the ‘60s with this poem, entitled “A Soldier,” by Mike Aresco. 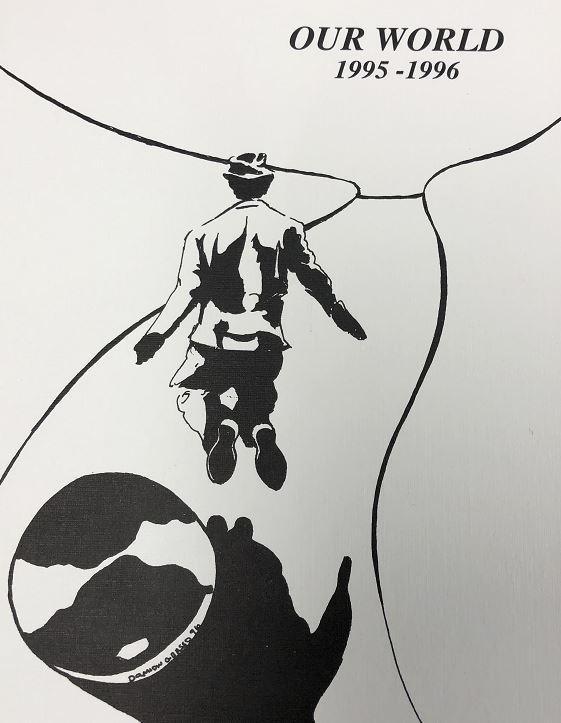 What does this day hold

Other than wind and cold?

His prayers plea for peace,

But why won’t this war cease?

You see, he is a soldier

He may die a lonely death

Away from all the flowers

But he is clothed in red,

A prince among the towers

Of peace that is not dead

He won’ be home for Christmas,

He won’t be able to call;

And still he loves you,

And always gives his all

You see, he is a soldier.

For if you lose trust in him 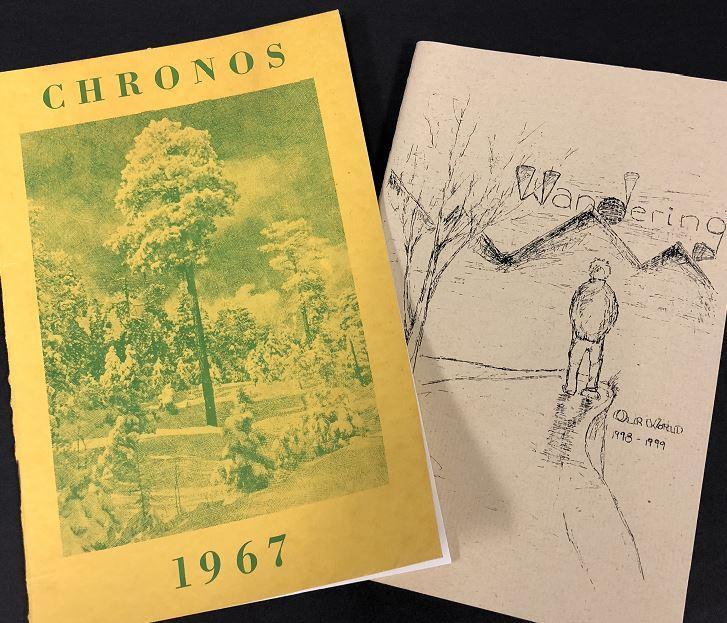 Who dies to keep you free;

Then for you all is dim

He dies so that you may live,And freedom cannot be.

Imitating a Greater One;

He who has his love to give,

May his will be done

You see, he was a soldier

You see, he too is a soldier.

The 1998-99 version of "Our World” was called “Wandering.” Mark Wooding had this challenge for us all, and it was not typed but handwritten, lightly, almost sketched:

I think we begin our existence as a sketch.

We start out with this light picture.

No real definite lines or features.

We are given special times in our lives.

To add some detail, shade some spots.

Make something of our lives.

There are some who choose to do this,

But they do not stop there.

They want to add color, value and depth to their life.

They want shades of green,

And a little hint of red in their sketch.

They want to live, learn,

Experience life during their time.

They seek adventure, live life to the fullest.

Even though not everybody can be bright and happy,

They try to make it worthwhile,

Adding the gray we all have somewhere.

Then there are those who just …

Sit & stare at their sketch,

They are afraid to do anything with it.

Or even scratch something out.

So they let life go by.

That sketch could have come out.

If Your sketch is still a sketch,

Add some color, some depth.

So you will have something worthwhile,

To show the teacher at the end.

Largely over the years, the main school publication has been known as the Kestrel, a 1999 edition celebrating the millennium, a February 2002 edition welcoming readers to “the new Kestrel” as it went to a newsprint format from more of a bulletin.

And, of course, as we entered the digital age, so did the Kestrel, once again fitting into the times but maybe not conforming to them. Student editorials remain an important part.