The words of the alma mater and fight song were written by Brother Robert, C.F.X., the first Principal of the school, and the music was from Eric Osterling of Cromwell. 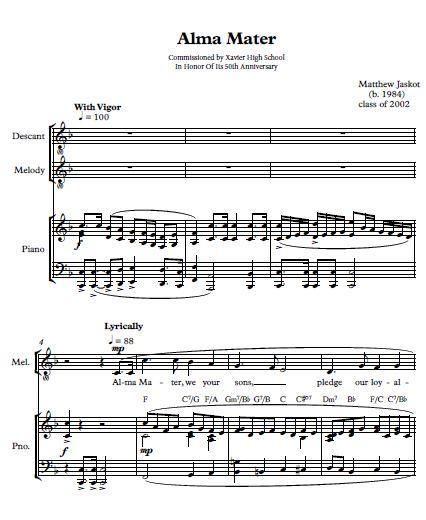 Alma Mater, we your sons, pledge our loyalty

For your fond concern for us, thankful we shall be.

Values of what’s good and true, beautiful and right,

These you taught us faithfully. Therein is your might.

In memory we can hear your challenge ringing –

Osterling was the band director at Portland High School at the time and a noted composer of songs and music, according to the April 1967 issue of the school newspaper, the Kestrel. The story said that the alma mater and fight song each had recently been completed.

The music to the alma mater was rewritten by Matt Jaskot ’02. Jaskot works in the music department of Holy Cross in Worcester and is an accomplished pianist.

“I composed the new Alma Mater in 2014, and it was first performed in May of that year at the spring music concert,” Jaskot said. “I was a guest artist at that concert, playing the piano part for the Alma Mater, some solo piano pieces, and a couple of other pieces with the Xavier choir.

“The recomposition of the Alma Mater was conceived in 2013, the 50th anniversary of the school. I was approached by Br. Brian initially about the project, and corresponded with [music teacher] Erik Elligers a couple of times during the writing process. I also rehearsed the piece with the choir on a couple of occasions before the first performance.”

The text is the same as the original alma mater.

“The excerpts that I found most important in the existing text, and therefore set with repetition were "Xavier, Alma Mater" and "Always Be a Man." The music [similar to the old Alma Mater] is in two primary sections, the first more lyrical ("Alma Mater, we your sons....") and then march-like in the second half ("Xavier Alma Mater..."). Along with the primary melody, I composed a descant (vocal harmony) and a keyboard accompaniment part.

“If I remember correctly, the original plan was to compose an alma mater that could also be used as a fight song, and I kept that in mind when composing the back half. I envisioned the music that accompanies "always be a man" as a possible fight song motive -- a short idea that repeats, and ascends in pitch on each repetition to build excitement."

Osterling died in 2005. His obituary noted that he was the music director for Portland Public Schools for 34 years and " having an international reputation as a composer and arranger, his compositions are extensively performed by schools, professionals, and college bands across the country, and are considered favorites by musicians and audiences, with more than 600 publications to his credit."

The fight song from more than 50 years ago:

Look at the Falcons. They're soaring high.

Showing their spirit to do or die.

Cheer for our Xavier men so strong,

Pointing their eights to the sky.

Bring fame and honor both far and wide.

Champions we want to be,

Turning all odds into victory.