The Dedication Of Xavier 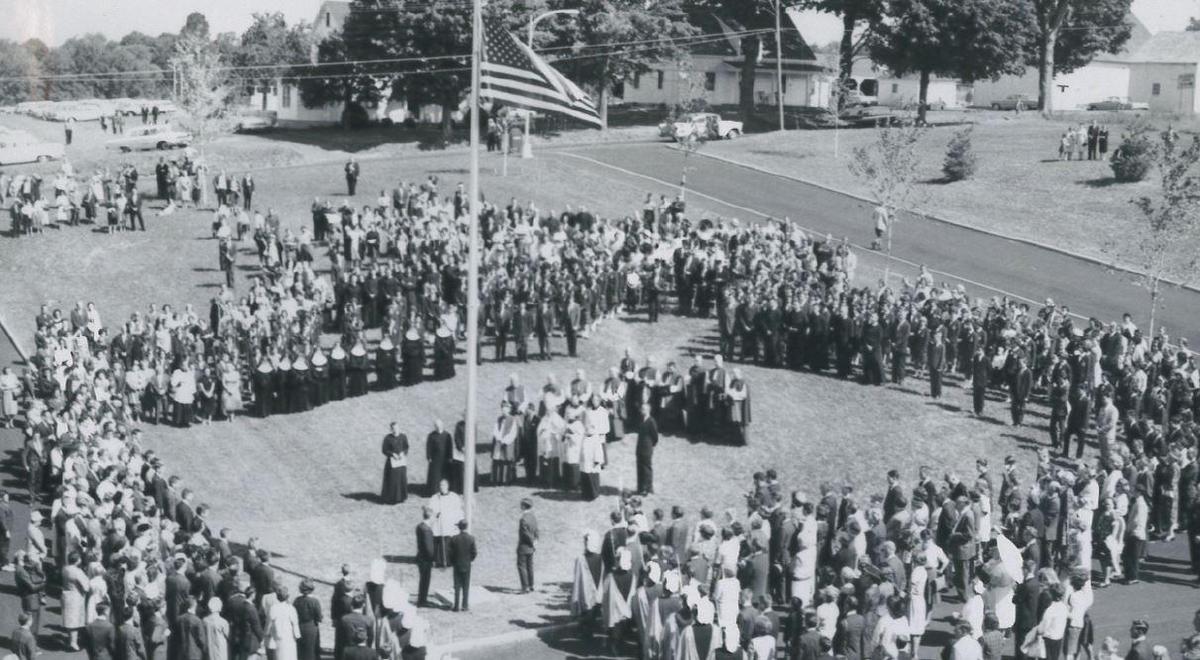 The September 1963 version of the monthly Principal’s Newsletter from Bro. Robert Sullivan, C.F.X., was all about the dedication of the school that was to take place Sept. 7.

The building would be open to tours before and after the dedication, and there would be a brunch served in the Brothers’ Residence for some invited guests.

Because the dedication was to end around lunchtime, machines in the cafeteria also would be stocked for those who “wish to eat in our beautiful cafeteria.”

Such things as soft drinks, milk, coffee, soup and ice cream were available for 10 cents. A special menu of items such as a roast beef sandwich (35 cents), a veal loaf or ham salad sandwich (25 cents), potato salad and various jellos and puddings (15 cents) would be available.

There was a call for the attendance at the dedication to be impressive.

Bro. Robert wrote: “The opening of a Catholic high school in Middlesex County is a memorable occasion, one that should be witnessed by a record crowd. The eyes of Middletown and Middlesex County will be on Xavier High School. Let our attendance at the dedication be a true index of our esteem of Catholic education.”

Writing in the October version of the Principal’s Newsletter, Bro. Robert was indeed proud of the crowd: “Our sincere thanks to all you parents for your splendid attendance … the massive turnout was far beyond our expectations. Bishop [Vincent J.] Hines, Brother Gilroy, Governor [John] Dempsey – all were deeply impressed by the interest and loyalty of you parents in getting the boys here and in participating to such an extent and in such great numbers in the dedication ceremonies.”

To start things off at 10:30 a.m. on Sept. 7, the 20-man St. Sebastian band formed a semi-circle around the flagpole in front of the school and played a prelude.

An American flag was presented to Brother Robert by State Sen. John Pickett on behalf of Congressman William St. Onge, who was hospitalized. It was no ordinary flag; it had flown over the Capitol in Washington. In a letter dated Aug. 16, 1963, authenticity of the flag was verified by these words:

This is to certify that the accompanying flag has flown over the United States Capitol. I understand that this flag is for the new Xavier High School in Middletown, Connecticut.

Students raised the flag and the band played the National Anthem as the crowd, estimated to be 1,500, sang. There was a flag-raising ceremony and a blessing of the outside of the building by Bishop Hines. Various parts of the inside of the building were blessed by the Bishop or priests from the county.

Gov. Dempsey was the keynote speaker at the program in the gymnasium. Part of Gov. Dempsey’s speech that day: … “We are doing much more today than dedicating an imposing structure of stone and mortar.

“What we are actually dedicating is hard work, faith, courage and vision -- particularly the vision of the shepherd of your diocese who had the faith to believe, the vision to see, and above all, the courage to do.

“I also view this ceremony as fitting and well-deserved recognition of the courage and hard work of the many, many dedicated men and women who have worked so unselfishly at the task of raising the funds required to bring this fine school into being.

“Finally, I urge the students of Xavier High, beneficiaries of all this effort, to make the most of the splendid opportunities offered here.”